What inspires me to do trip reports?

It all started when I was doing trip reports on an aviation website (Airliners.net), I was inspired by other trip reporters with their work. The decision to create this blog came when a host image website which I stored my photos, deleted my important photos and I was pretty furious with it. After much consideration, I decided to create a blog. This way, I can record my trip experience and store the photos in this blog. I hope you enjoy my work and I will try my best to improve the contents as much as possible.

*Aircraft photos are dedicated to the respective photographers from Airliners.net.

I am always looking for improvement, so if you have any suggestion, feel free to leave a comment over here.

Flying on Qatar Airways was an agenda and when this airline was flying on Singapore to Jakarta route, I knew I had to book myself on one. Because of the SARS period, I had to postpone my trip, a few months later and thanks to the airline, I did it without paying any penalty. To reward myself for the hard work, I booked myself on J class that cost me around S$600 for the return trip. 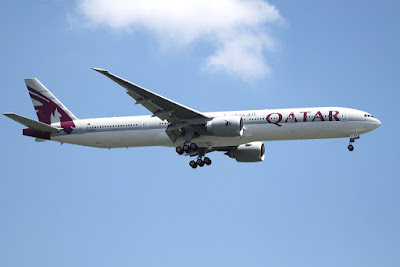 Now in the 'Oneworld' scheme. 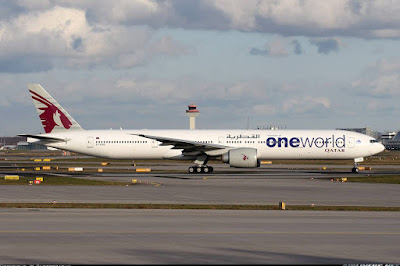 My seat! With champaign, of course, to start off my short trip! 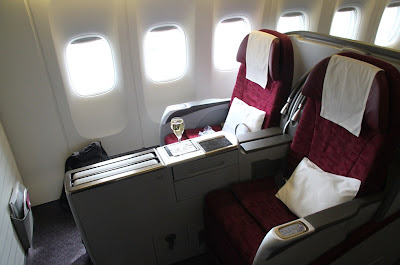 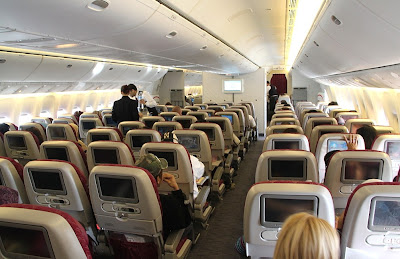 Back to my cabin! The J class was empty so I managed to take snap quite a few photos. 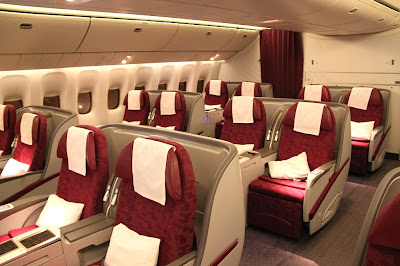 The ambience is great on this airline's 77W, it gives me the cosy feeling. 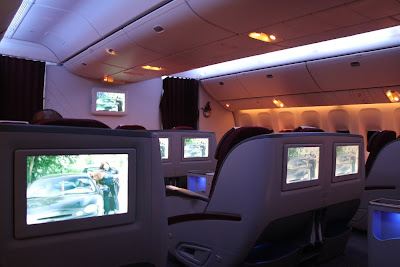 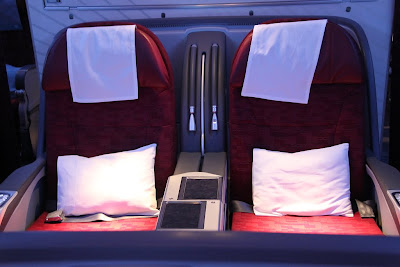 The seat is comfortable especially with its wide frame. There is a massage system that comes in useful and its full-flat bed which allows you to get some well-earned rest during long haul flights. 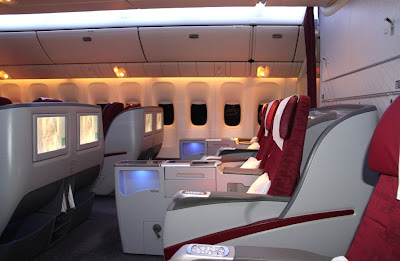 A photo of me was taken during the flight! 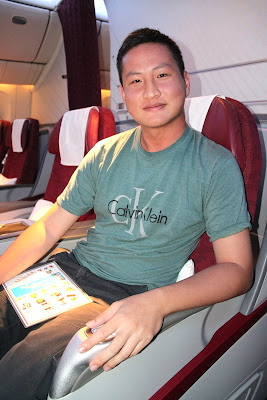 This trip was supposed to take place in July earlier this year, but because of the H1N1 flu, I decided to postpone it to this date as most of my students would have finished their exams. Before that, I was looking at the websites, deciding whether to go. I always wanted to try QR to make a comparison with EK which I had flown with them in 2003. When I saw a special offer of QR at $200 including airport tax for economy seats, I have decided to grab it. Later on, decided to use my miles to upgrade to business. Initially, my flight was supposed to be scheduled to be operated by A330-300, changed to A330-200 and then finally the Boeing 777-300ER. I wouldn't mind the A330, as it has been my favourite aircraft all these years followed by the 77W.

On the day itself, I got out of my house early without any luggage but just a backpack and my camera bag to avoid the time waiting for luggage at CGK airport. Although the flight was 1610 hrs, I went to the airport at 1pm so that I could do some spotting. I reached there and saw the check-in counter just opened. Headed to one of the empty counters, got my boarding pass and made my way to the immigration area. I went to the SATS lounge, it was empty at that point in time. I managed to take a few photos of it. If you asked me, it looked dull!

Time passed fast quickly, during my spotting, I saw a special bird, CX 77W B-KPL (Oneworld) livery and immediately shared with a few buddies of mine. Soon, it was time for boarding. When I reached the gate, passengers were already boarding the plane. I made my way to the first boarding gate and to my seat 1K. As this was my very first time flying on Business. I was overwhelmed especially stepping into the business class section, I started exploring and boy, the legroom space was great especially for a 192cm tall person like myself. A kind stewardess, Myra came and asked me what would I like to drink, so I ordered a champaign and enjoyed it while the boarding process was still going on. After pushed back, Myra cleared my drink and another attendant asked me what I wanted to drink after take-off, I asked for another glass, but after takeoff, like the air stewardess, I have forgotten all about it. I only realized it after landing. During the flight, hardly any smiles from the crew, it was disappointed really.

My first impression on the flight crews was unfavourable as I didn't feel exactly welcome, some of them gave me a half-hearted smile, but a few of them were extremely nice to me. (Mixed feelings). I didn't think too much about it, as I just wanted to enjoy my flight on the 77W! Comparing with Emirates, the service on Emirates was much better and mind you, I was in economy class when I flew with them.

Pushed back as early and soon we were on our way to runway 20R and a quick rotation to the sky. As this is my first time seating so in front, I couldn't wait for take-off. Taking off was pleasing! I wasn't that used to the quietness of the taking off and definitely enjoyed hearing the sound of the GE90-115B roaring away! Music to my ears certainly.

After 15 minutes, a light meal was served. It was a choice of either Sea bass with fried fish with rice (Malay style) or prawn noodles and I chose the former. The food was so-so, nothing great about it. Nasi Lamek mixed with Sushi is really weird, and it didn't taste that nice. I tasted better airline food than this, well at that moment, I hope the food on my return flight would be better. After eating, I took the chance to take a few cabin shots, (enjoy the photos) I also played around with the seat, it was easy to use with message function on it. Overall, I was quite pleased with the seat system. As this flight was just an hour and 15 minutes, I didn't bother to play with the PTV system.

Soon, it was time for descend, the flight was too short for my liking. Overall, the flight had been relatively smooth just a few bumps and the Captain had the seat belt on and off a few times just to play safe. Landing in Jakarta was quite smooth, we landed at 07L and a long taxi to our gate D3.

Overall, I expected a better service especially in business class even though this was a short sector.

My first experience with the airline wasn't a good one. Service was disappointing considering that this is J class. In 2009, the airline was still struggling to catch Emirates' attention. Now in 2014, things are so much different. However, at that time, the airline was quietly expanding and purchasing new aircraft and I was glad to have tried this airline while it was still growing. For the price I paid, I could have done longer routes elsewhere but I am glad I did it, so I would need to fly with the airline again to see how it fare. 5 years may not be a long time for some, but there are definitely many changes back then and now. Would I recommend this airline? Yes, for reliability and comfort. I hope the in-flight service of today matches it!