History Of Skymark Airlines And The A380

Do note: This airline has disappeared from the skies, taken over by ANA. This blog post was done when the airline was still in operation.

When the airline announced an order of Airbus A330 and Airbus A380, everyone associated with aviation went "Wow"! No one expected this small carrier in Japan to attempt operating Airbus wide-bodies especially the Airbus A380. The airline placed a firm order of 6 Airbus A380s which was to be taken delivery on the 2nd half of 2014 but the delivery didn't take place due to financial problem. As for the Airbus A330-300, the airline took delivery of 5 and not long after, the airline grounded them and cancelled the rest which ended the Airbus and the wide-body operation, leaving the airline to focus on the Boeing 737-800 domestic operation.

In November 2010, this airline announced the A380 orders and stating its intention for it. Flying these "Whalejets" to lucrative markets such as Paris, London, Frankfurt and New York in a 394-seat configuration consisting of 114 Business Class and 280 Premium Economy Class Seats. This is certainly a very bold move for an airline with very little international experience. It was to become the first Japanese airline to operate the A380. ANA and Japan Airlines have ruled out this aircraft due to its capacity not suitable for its network, as both preferred the size of the Boeing 777-300ER and would continue to operate it until newer generation aircraft enter the market.

As for the Airbus A330, the aircraft was to be configured in 271 Premium Economy Class only and would be deployed on key domestic routes such as Tokyo Haneda to Sapporo and Tokyo Haneda to Fukuoka. These premium economy class seats had a generous seat pitch of 38-inch legroom space and 22-inch seat width. This airline had plans to install these seats on the Boeing 737 but shelved it in early 2014, to continue competing with Low-Cost Carriers such as Peach, Jetstar Japan and Vanilla Air.

Unfortunately, losses due to the weak currency and other factors forced the management to change their plans. Measures were then made. First, the airline downsized its network from Narita Airport to only 3 destinations: Sapporo, Yonago and Okinawa. This is because of the competition from the Low-Cost Carriers causing it to lose money and since it wasn't doing well, finance for the 3rd Airbus A330 and others were greatly affected, as a result, Boeing 737s were re-deployed on charter flights from Tokyo Narita and Haneda to Guam.

After the introduction of the airline's A330 to its network, an observation was made of its load factor. Comparing to the Boeing 737-800, its average load was only around 67% of its capacity in December 2014. Airfare was increased to around ANA and Japan Airlines' and this possibly cause the airline to lose some capacity to other carriers.

The airline and Airbus at that time were in discussion on the A380 matter. As the airline has no financial means to operate them, they had no choice but to cancel the order. However, a few aircraft were in the advance production stage and were ready to be taken delivery of in a few months time, it was far from being straightforward in settling this matter, so it went on for a while and rumours surfaced that Airbus would file a lawsuit against this carrier, no one else know this matter more than the airline and Airbus, but hopefully things would end well for both of them. The problem for Airbus is that there weren't any other airlines besides Emirates were keen to take in more A380s or for new operators to purchase them. Why not Emirates? Well, Emirates are operating GP7200 powered A380s and possibly weren't want to add a different engine type to the fleet. This is my opinion, and of course, there are other factors as well.

In January 2015, the airline had no choice but to file for Bankruptcy Protection and reported 71 million yen in liability. JAL and ANA had submitted a proposal to code-share with the airline on some routes. Meanwhile, drastic measures as mentioned earlier were taken and the airline hoped that someone would bail them out.

At this point, I can only hope for the best for this airline and hope it continues to play a role in the Japanese Aviation. The move to operate an all-Boeing 737 fleet, for now, maybe the best thing for the airline. Whether the airline picks up the Airbus A330 again in the near future, it is hard to say but what's important is getting the financial side back in order.

The airline is currently operating only Boeing 737-800. (Photos from yahoo, airliners.net and Airbus) 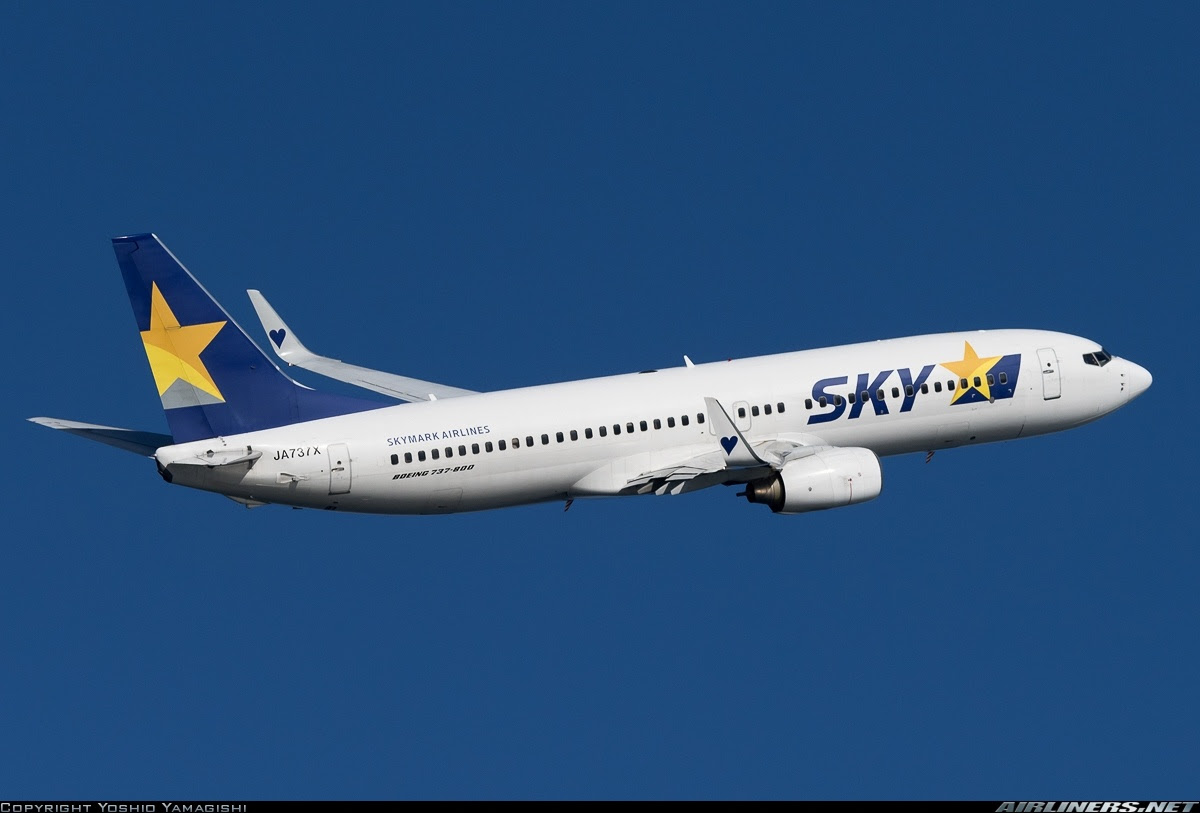 This is how the A380 looks like in Skymark livery. The actual A380 was not fully painted. 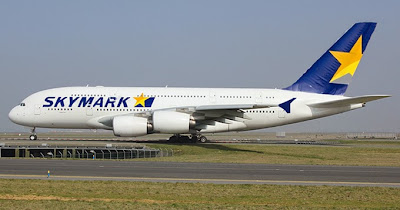 One of the two Airbus A380s was already in preparation for delivery to the airline in Mid-2014. 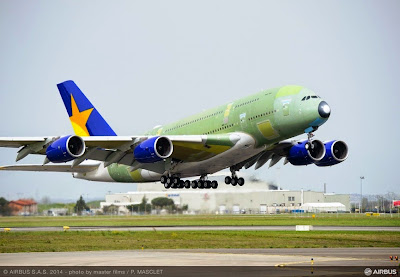 Fortunately for the Airbus A330-300 (photos below), the airline managed to take delivery of 5 of this type before being stored. They were leased from a lessor. 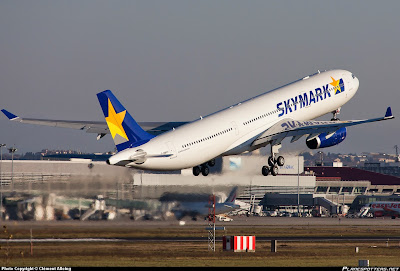 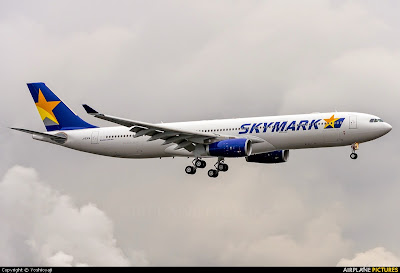 Thanks to Yahoo Finance's article.

(Reuters) - Japan's Skymark Airlines said it will stop flying Airbus (AIR.PA) A330 jets in favour of a single-model fleet of Boeing Co (BA.N) 737 aircraft to cut costs after the discount carrier filed for protection from creditors late on Wednesday.

"We will stop using the A330s from February," Skymark's chairman, Takashi Ide, told reporters at a news conference in Tokyo on Thursday.
Japan's leading independent budget airline, Skymark sought protection from creditors blaming a weak yen and a dispute with Airbus for its financial straits. It said in a statement on Wednesday its liabilities were 71.09 billion yen (400 million pounds) as of its filing with the Tokyo District Court.
Skymark, which had planned to introduce ten leased A330s into its fleet, currently operates five of the European jets. In July the carrier cancelled an order for six Airbus A380 superjumbos.
In addition to the weaker yen, pushing up leasing costs and other expenses, Skymark is blaming Airbus's demand for a $710 million dollar cancellation fee for its financial troubles.
Skymark's new president, Masakazu Arimori, in Tokyo declined to say how the carrier's filing will affect negotiations with Airbus over the cancellation fee. Skymark, which has a fleet of 28 Boeing 737s, said on Wednesday that Tokyo-based private equity firm Integral Corp has agreed to provide financing to help the airline restructure, pending court approval.
Skymark said using one type of aircraft will help cut monthly operating expenses, a strategy the airline adopted when it began flying in 1998 in an effort to undercut its bigger rivals, ANA Holdings and Japan Airlines (JAL). An Airbus spokeswoman said on Wednesday that the European planemaker was aware of the Skymark filing. "This is now a matter for the courts," she said.
The loss of Skymark as an operator of its jets marks a partial reversal of recent gains by Airbus in Japan, a market long dominated by Boeing. The U.S. firm has deep ties to local aerospace firms in one of Asia's biggest aircraft markets.
Airbus made its big breakthrough in Japan in October 2013, in a landmark deal for JAL to buy 31 wide-body A350 jets with a combined $9.5 billion list price.
(Reporting by Maki Shiraki and Tim Kelly)
At this time, the airline is being pursued by ANA and Air Asia and what happens in the near future is still unknown. This airline needs financial back-up and its needs it soon. The current management of Skymark prefers the airline to remain privatised, so Air Asia may have a better chance but in the aviation world - its a fierce market. No 2nd chance is given for most of the time and if you do get one, you better learn from your mistake! Whatever decision is made on this carrier, it has to benefit all parties.
Photos are credited to Airbus, ZipanguFlyer and Jetphotos 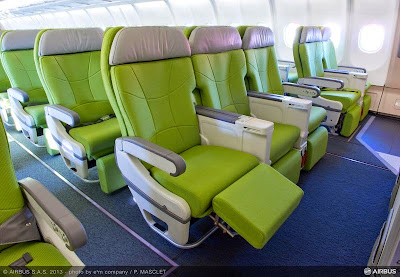 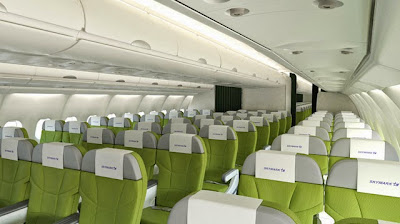 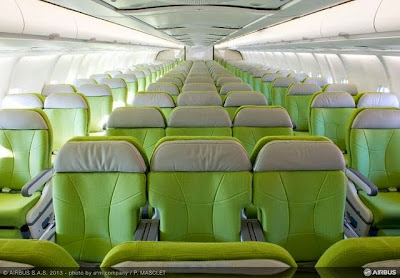 The controversial mini-skirt uniform was replaced by the standard one not long after because of the complaints from the crew. This uniform and the seats are dedicated to the Airbus A330, hoping to attract the passengers but sadly, it didn't work out for the airline. 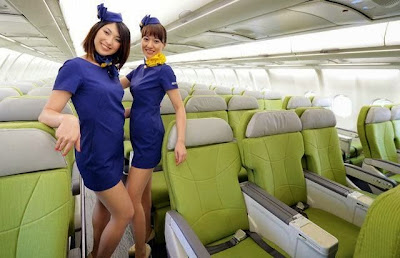 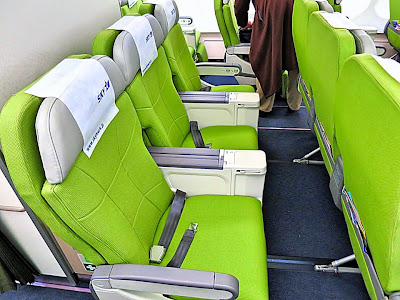 Samuel told me how much he and his partner enjoyed their Skymark A330 (HND-FUK) flight very much.
(This blog entry may be updated in the near future.)

I wish I get to experience this airline's Airbus A330 especially after looking at how nice the airline's Premium Economy product is. Its the only operator that uses this configuration and now that is grounded, it is unlikely the airline would fly them in the near future. Where would these aircraft end up? No idea, but for these new aircraft being grounded is so wasted!

*Update: The lease of these aircraft have been terminated and rumour is going around that they may go to Air Asia X, stay tuned for more updates!

Aircraft have left Japan and headed back to the lessor's home base. *

Have you flown with this airline and the A330? Do share with me your flying experience.