Welcome to my tribute report to Singapore Airlines Boeing 747-400!

The reason for this tribute is because I see this aircraft type more than the other aircraft types with Singapore Airlines, it's weird to see so few Boeing 747 operators these days but that's how things work now with more fuel-efficient aircraft in the market.


The launch customer of the Boeing 747-400 was Northwest Airlines, delivered in 1989. Singapore Airlines took delivery of the first aircraft in 1989. It was 9V-SMB that was delivered first ahead of SMA from what I know. The current configuration of the aircraft is 12 First class seats, 50 Business class seats and 313 Economy class seats which gives a total of 375 Capacity. There are currently 3 Boeing 747-400 that are plying on Singapore to Melbourne routing, 9V-SPJ, 9V-SPP and 9V-SPQ. According to a reliable source, the 3 aircraft would be sold to Transaero. The last day of revenue service would be on the 24th of March. However, there would be a farewell flight for all those who are interested, it would take place on the 6th April on flight SQ747/SQ748, bookable on SQ's website.

I remembered when I was young, I kept flying on this aircraft type and I got a bit sick of it. I told my mum, can we fly on other airlines. Why is it always on SQ and 747-400? When the Boeing 777 was launched, I was very desperate to fly on that aircraft. Thinking back, how silly I was. I did, however, appreciate every flight I had on the 747-400. I am very, fortunately, to have flown with the following operators: Singapore Airlines, British Airways, EVA Air (-400 Combi), Japan Airlines, Lufthansa, Air New Zealand and United Airlines (Old). So if you get a chance, fly on more Boeing 747-400 before the numbers disappear. Japan Airlines had 2 configurations to its 744. I was fortunate to be able to sit on the upper deck on my flight to AMS from NRT. It was so quiet and spacious and not many airlines have Economy class on the upper deck.

The retirement of SQ's B747-400 is not a shocker really since we all know that SQ's tend to retire the planes earlier than others. The fuel prices and the availability of more fuel-efficient aircraft such as the A380 and B777-300ER are the reasons for SQ's 744 retirements. There are some who likes the plane, and some who don't. I belong to the first group. This 747-400 brings me lots of wonderful memories. I have nothing negative to describe about her. She's photogenic in every angle! Even though the product on board is outdated, but the feeling of flying with her is overwhelming. The fact that its a 4-holer (4 engines) makes its even more special. These days, the airline industry is being dominated by twin-jets such as the Airbus A330 and Boeing 777 which are the top sellers in their category.

Unfortunately, one out of the 51 Boeing 747-400 has its lifespan ended early due to a mishap in Taipei. I should not go into that, but the aircraft involved was 9V-SPK. One of the 2 former Tropical livery special scheme. The other aircraft that had the scheme was 9V-SPL which was repainted to the normal scheme shortly after the incident. 9V-SPP later on was painted in the star alliance scheme. Here are the photos: 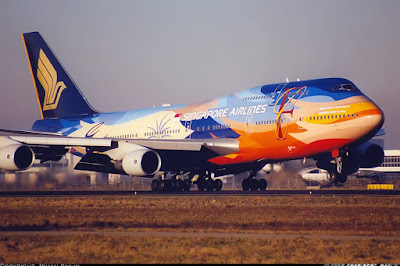 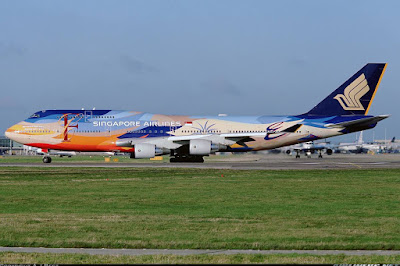 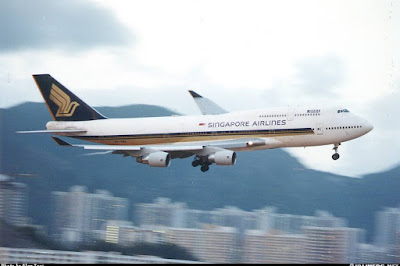 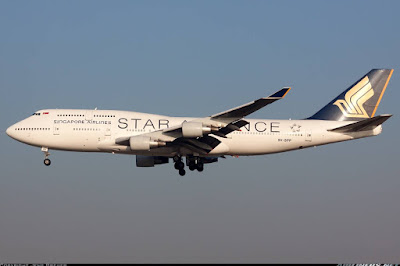 9V-SMZ in the 50th anniversary livery 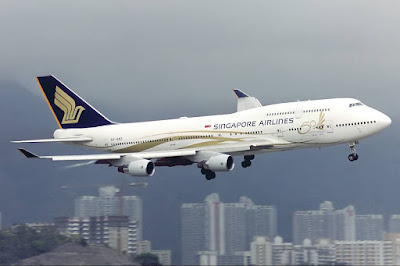 I will definitely missed the presence of SQ's Boeing 747-400 pax in Changi. The SQ Cargo division however is still operating the Boeing 747-400 but the Freighter version, so hopefully that will go on for a period of time. Perhaps an order for Boeing 747-8F is possible if the market picks up again for the airline. For those who wants to fly on one, you can still do so as British Airways and Qantas is still operating this type.

So long, Boeing 747-400. Thank you for serving us from 1989 till this year 2012. You have been a great workhorse for the airline and a crowd pleaser with your beautiful aircraft. I hope the ex-SQ 747-400s regardless where you are, will continue to fly for many years. Good Bye, Singapore Airlines Boeing 747-412. (12- a Boeing customer code for Singapore Airlines)

Thank you for reading my tribute to the Queen of the sky.