Singapore Airlines Airbus A340-500 Joyride to Bangkok and Back

Welcome to my trip report on Singapore Airlines' A345 experience!

I went on this trip with an old friend, Alvin in January 2004.

When Singapore Airlines announced a couple of regional routes for the Airbus A340-500 at the start of this aircraft's operation to get the crew more experience with this aircraft type before it starts its ultra long haul flight to New York and Los Angeles, we were interested. The 2 destinations were Bangkok and Jakarta, we decided on Bangkok as the flying time is longer than Jakarta. The flight number SQ510/511 were used for this A340-500 operation and it lasted for 1-2 months if I am not wrong. It was an additional flight to Bangkok and we booked on it to not only fly on this aircraft type but also to try out the Premium Economy Class that it offers. So once the air tickets were booked, it was just counting down to the day. The airfare cost around S$300 for the return, both ways on the Airbus A340-500.

*Photos are credited to the respective photographers from Jetphotos.net and Airliners.net. 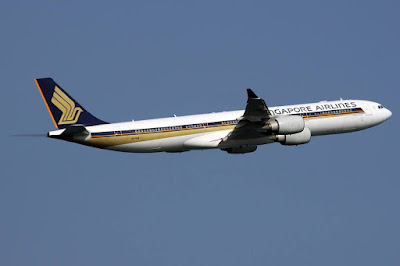 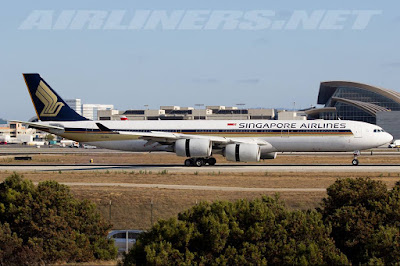 History of the Singapore Airlines' Airbus A340-500

This airline ordered 5 Airbus A340-500 with another 5 on options but the option was not taken up and the airline operated only the 5 on order. (9V-SGA to 9V-SGE). Not many orders were made for this aircraft as the most airline doesn't need the range and also the fuel burn of the engines makes it not economical to operate them on shorter flights on a regular basis as they are other better-suited aircraft for the shorter routes. These 5 aircraft entered the fleet from 2003 onwards and started the longest flights in the history of aviation, Singapore to Los Angeles and Singapore to Newark (New York) non-stop. The aircraft was initially configured in 2 class; Premium Economy and Business Class but later on it was re-configured to a single-class Business Class cabin, trying to make this long haul flights work. Unfortunately, a few years later, the airline decided to discontinue the flight and retire the aircraft. It managed to trade-in the 5 Airbus A340-500 with Airbus in favour of new Airbus A350-900s which the airline will start delivery of them in 2016.

My friend, Alvin and I were fortunate to experience the airline's first Premium Economy product during the aircraft's first few months in service. 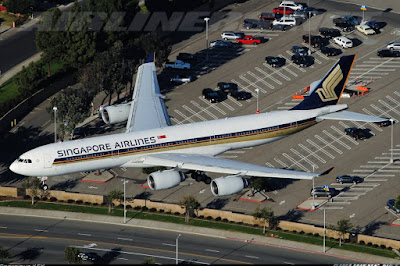 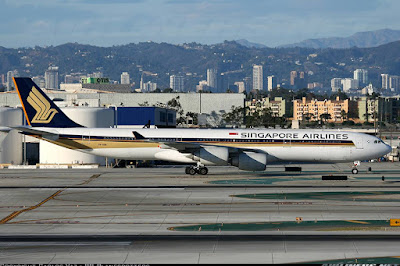 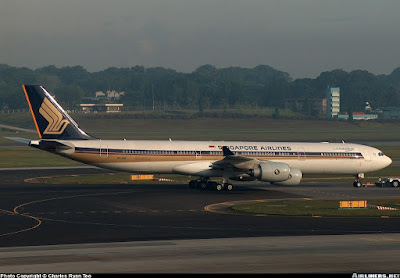 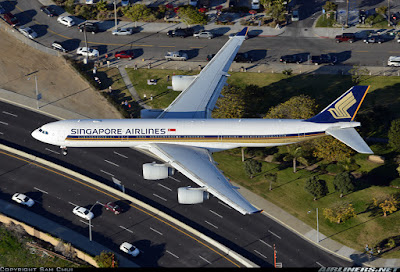 My memory of both flights

On my flights to Bangkok and the return, I flew on 9V-SGC (To Bangkok) and 9V-SGA (On the return). I managed to get a cockpit visit, thanks to Alvin but the Captain wasn't happy to see us in it, so our visit was a brief one and we left not very long after. The First Officer, on the other hand, was very nice, he was apologetic to us.

Very generous legroom space, it was very comfortable and I remembered I sat on the red seat, not too far from the rear. Alvin sat at a window seat of the last row. 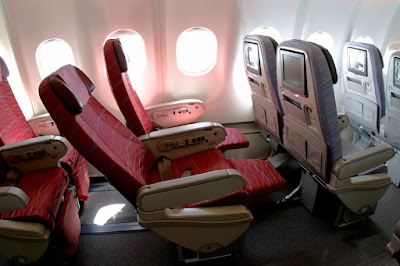 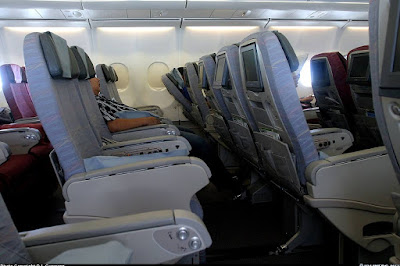 In the very comfortable layout of 2-4-2 with 38 inches, I would have been able to enjoy the 18 hours flight to the U.S. 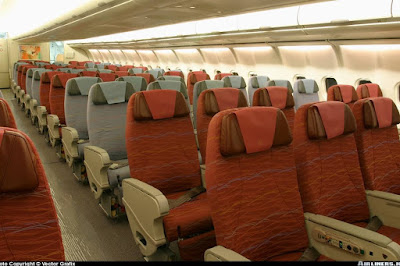 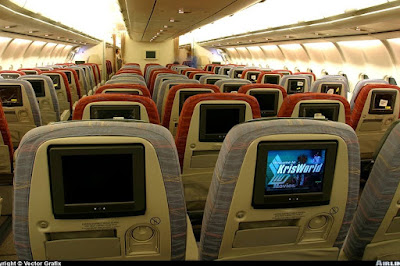 Personally, I found this cabin very refreshing compared to the Economy Class of other aircraft types back then, this became my favourite at that time.

Premium Economy Class standing area for passengers to stretch their legs during the long haul flight. 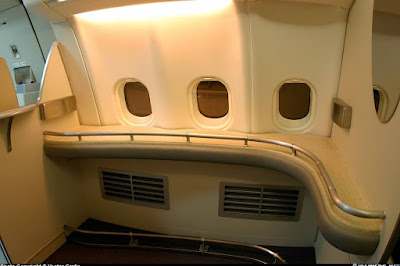 I haven't tried this before, but I was told how comfortable these seats are. 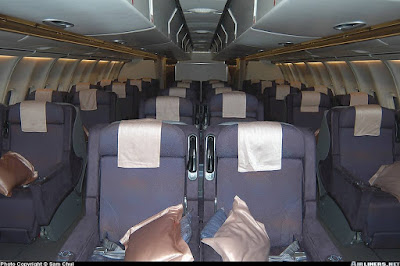 Later on, SQ retrofits the A340 with this newer Business Class product, removing the Premium Economy Class as a result. 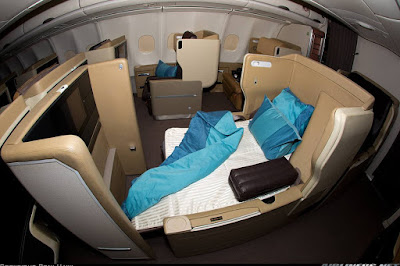 My photo of the Business Class seats (9V-SGA) 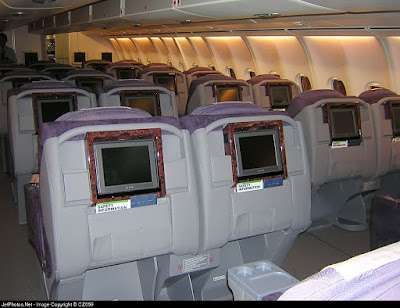 The Airbus A340-500 is one quiet aircraft, the take-off was power yet quiet and it flies pretty much gracefully in the skies. Even though it was turbulence at certain points of the flight, I felt the aircraft was stable.

Service on both flights was great, but I had one of the worst meals onboard any commercial flight out of Singapore. There was a choice of a fish or chicken, and I chose the former. Regretted it after that, I ate a few bites of it before giving up, it was that bad. It had the stinky fishy smell and I remembered how inedible it was, at least to me. On the return flight, I had the chicken which was a lot better. 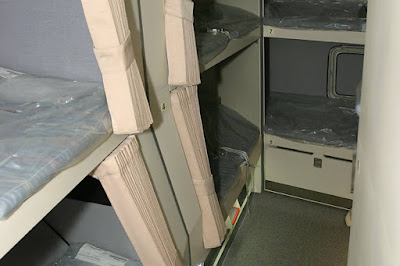 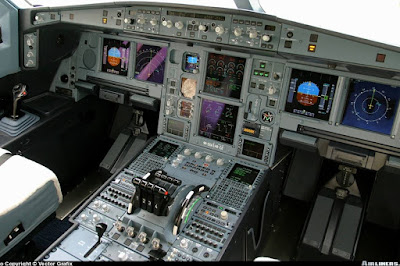 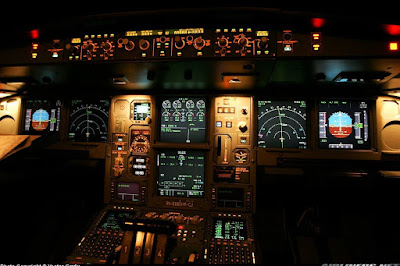 We were flying through bad weather at this moment. 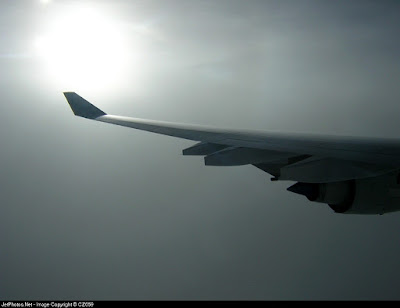 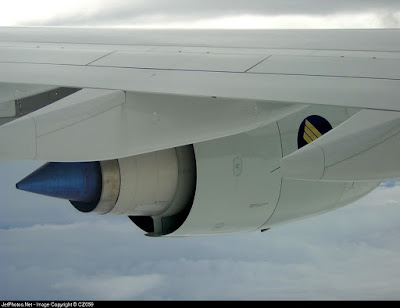 Beautiful photos of the airline's Airbus A340-500! 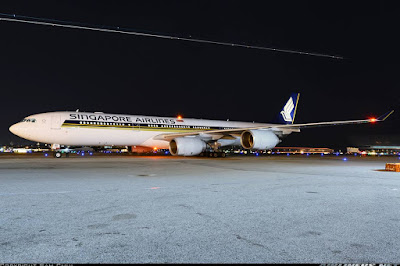 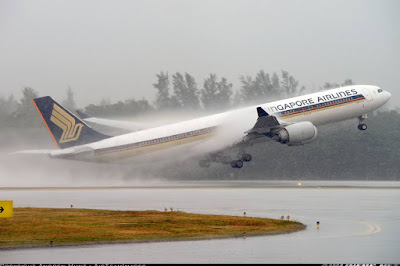 When Singapore Airlines announced the retirement date of the Airbus A340-500 and the end of the direct U.S flights, it was a sad day for aviation especially those who fly on this regularly. Many saved up their miles to get on board this flight and they did so without regrets. I am glad to have flown on this beautiful aircraft even on the short-haul sectors, it will always be in my heart, the Airbus A340-500, Leadership.

The aircraft was retired from the fleet near the end of the year 2013, and a few of them have been stored since then. They have many years of flying left, the question is which airline would pick up these airframes? Hopefully, the smaller operators from the Middle East would pick them up. Thai Airways have also retired theirs and the Airbus A340-600 too.

Singapore Airlines will restart direct flights to the U.S.A with the Airbus A350-900 (The Ultra-long version, identical appearance with the standard A350)

The photo below: Singapore Airlines A350-900 (This version will be used to fly Singapore - San Francisco direct from October 2016 onwards) 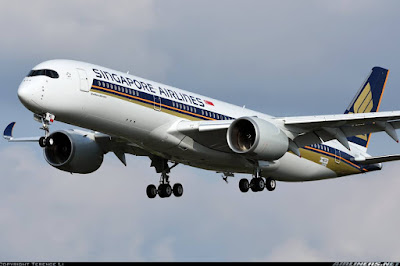