My First A380 Flight with Singapore Airlines (SIN - LHR)

Welcome to my trip report on Singapore Airlines flight SQ 318 from Singapore to London Heathrow!

I have updated this report to make it even better than the previous version. (July 2014) Hope you enjoy the updated version! I try to add in more details I can remember. As usual, a big thank you to all the respective photographers from airliners.net.

This trip was planned 4 months ago. I wanted to fly on the A380; my choices were Emirates, Qantas or Singapore Airlines. Emirates was my first choice, but when I was browsing through SQ's old website (Much user-friendly than current), I saw a promotion for 2 to go, $1300 for each and I didn't have to think twice. Immediately, I went down to the office to book and got my preassigned seats, 82A and 82C for outbound. I heard a lot of stories about the standard of SQ's service going down, so I want to see for myself how true it is. My last flight with SQ was on the A345 SQ510/511 on SIN-BKK-SIN routing, that flight operated for a short while, as to train the pilots to get used to the aircraft. Alvin Yip and I were lucky to catch it before the aircraft became a full business class configured aircraft. 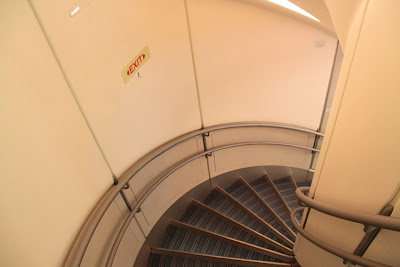 Photos of me taken with a couple of cute SQ ladies 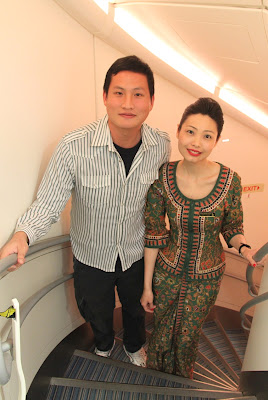 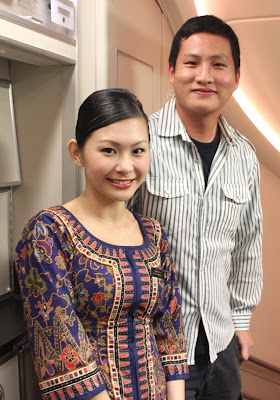 The lower deck of Y class 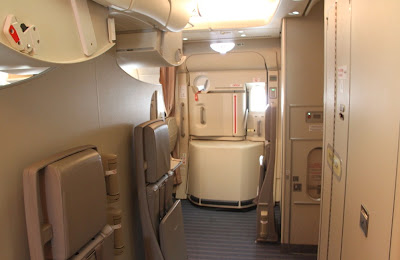 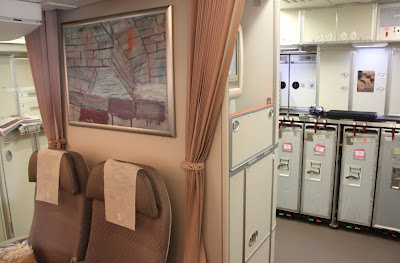 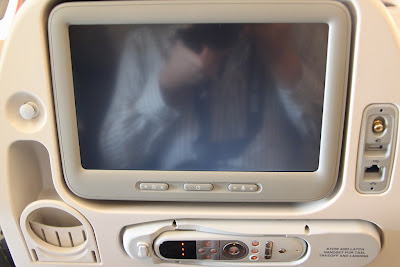 Upper deck Y class - the cabin is in the 2-4-2 configuration. 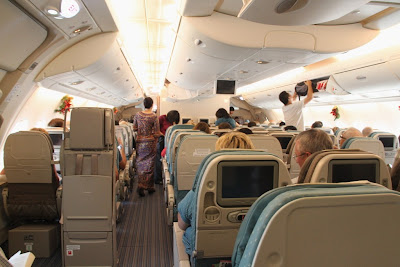 Lower deck Y class - more crowded but it is spacious. 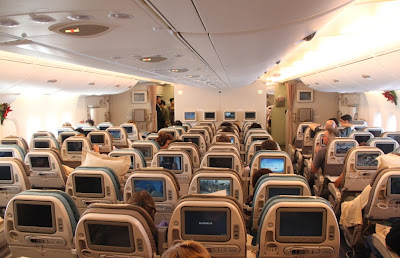 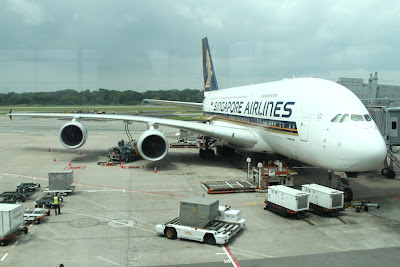 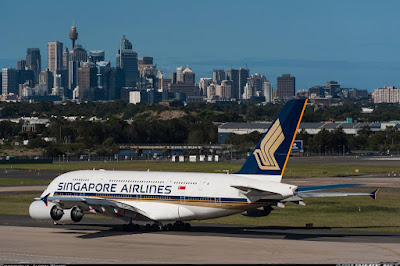 I met my mum at the airport as I wanted to go early to do some spotting. Along the way, I met a friend at Terminal 3 air-side. We photographed Kingfisher's A332 and a few other usual kinds of stuff before splitting ways. I had lunch with my mum at Burger King before making our way to the gate, B7. There it is, the magnificent A380, 9V-SKF waiting for us. There were another 2 A380s at other gates, 9V-SKA (Bound for HKG) and 9V-SKB (Bound for Melbourne). I took a few shots of the SKF at the gate before making our way to our seats. Our seats were just in front of the toilet and naturally, our main concern was the noise and smell, but it didn't affect us one bit throughout the flight.

We settled down for about 20 minutes before the plane pushed back, the usual safety video was shown and soon we were on our way. The funny part is 02L was opened at that time, but we taxied to 02C for take-off. I asked the crew, but they were not sure as well. Anyway, the take-off was powerful even for a full-loaded A380 and shortly after, we hit turbulence, but it wasn't that bad. The Captain warned us that the flight would have light and moderate turbulence, and soon we felt it. Turbulence at one time got quite bad flying through the Bay of Bengal. It is usually turbulent crossing that area.

In regards to the meals, (Sorry no photos) we had the choice of Beef, Chicken and Fish. My mum chose the Fish and I choose the beef which was my biggest mistake, it was very tough and chewing on it was difficult. I gave up halfway and ate up the rest of the food instead. It was so bad that I tried to ask for another meal, but there wasn't any left. Later on, we had another meal which took place a few hours before arriving in London. We had the choice of Fish with potato or Chicken Noodles and this time we had both of them. I had the chicken noodles while my mum had the fish and we were happier this time.

Some more photos of the cabin (Airliners.net photos): 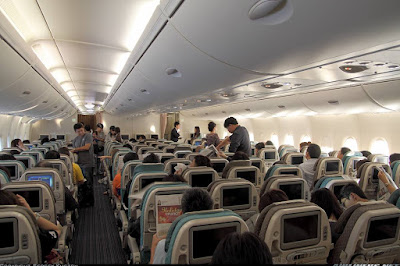 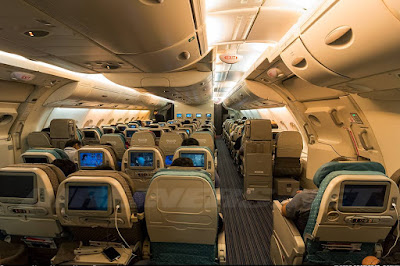 Premium Economy (At that time I flew, this class was not available) 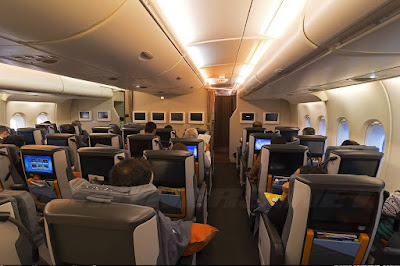 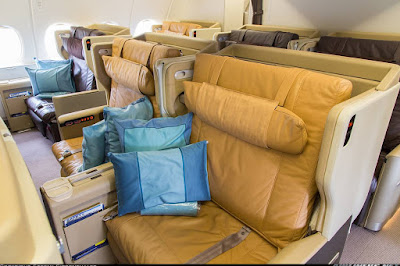 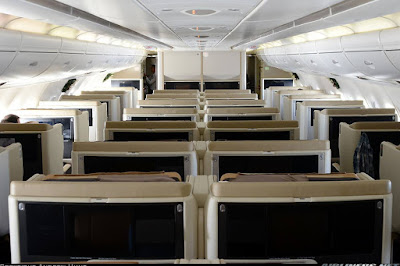 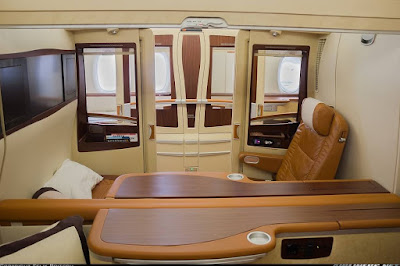 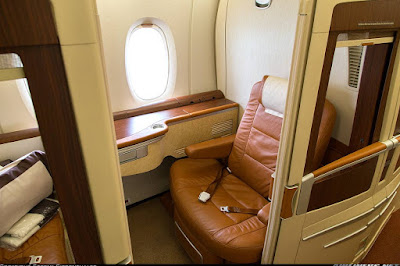 Doesn't the First Class Suite look great? The airline decided to upgrade this class to compete with the likes of Emirates and others. Back then, this was a "Wow" factor! Now? It is still some of the SQ frequent flyer's favourite especially on the Boeing 777-300ER, however, there are other airlines that offer competitive First Class products and the airlines have to keep upgrading to fight off the competition.


I walked around to stretch my legs, exploring the whole section of Economy class which includes both upper and lower deck, stretching my legs. I had chats and waves of laughter with the flight crew, they were amiable, smart and fun-going. Most of them were Singaporeans and a few of them were Malaysians. They really know how to spoil me, offering me lots of goodies and drinks. I am impressed with the service. Some airlines on long-haul flights, the crew can disappear for most of the time and appear only when they are supposed to, but this set of crew was attentive; offering drinks and snacks from time to time. Great set of crew.

While crossing the Indian Ocean, the plane shook wildly, the seat belt sign was turned on. We were tossed up and down, right and left, and it happened a couple more times before the weather improved when we were close to arriving our destination. On approach to LHR, we made a few turns, went through some clouds with a few bumps before finally arriving at Heathrow Airport Terminal 3. Despite the crowd at the airport, passing through immigration was surprisingly fast and smooth! It only took 15 minutes to walk from the Gate to the baggage claim.

As time flies pass from 2009 to today (July 2014), the airline has undergone lots of changes. It is not the same as before especially the in-flight service. Personally, I feel that the airline focused too much on its premium classes and the in-flight service suffered in a result, especially for Y class. However, you can still trust this airline for reliability and safety. As the airline is part of the Star Alliance, the network is excellent and you are most likely able to travel to the places of your choice either with this airline or its partners.

Hope you enjoy my report.