A Getaway from Asia with LOT Polish Airlines Part 2

Welcome to my part 2 of my trip report with LOT Polish!

Choosing this sector, Warsaw to London City was an easy decision. After 2 flights, I would be tired and since my sister's place was near Tower Hill station, using this airport was my obvious choice. It was a good thing because I didn't know LOT's ERJ-190 was new until I did a check out on the airline's fleet. LOT has purchased this aircraft to supplement the fleet of Embraer. Would be glad to fly the airline's new kid on the block!

What's the difference? You can check out more information of this aircraft over here. 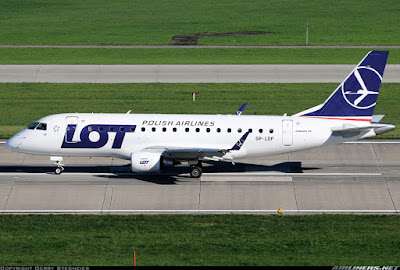 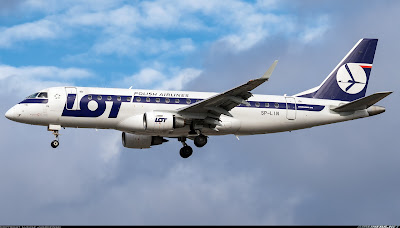 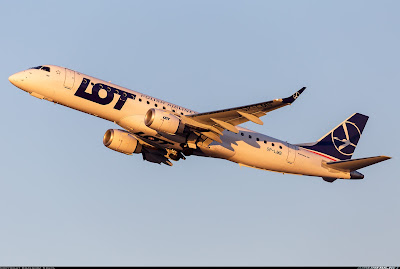 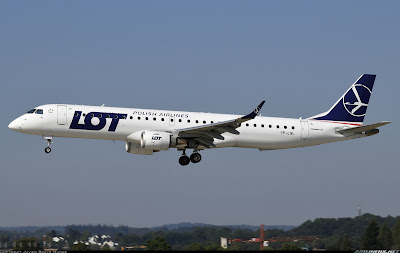 Can you spot the difference?

London City Airport is based not far from Central London, at London Borough of Newham. This airport was built in 1986-1987 by Mowlem, an engineering company. In 2016, this airport was bought over by Consortium of AIMCO, OMERS, OTTP and Kuwait Investment Authority. I didn't know this airport was privatised until recently! This airport, unlike the other famous airports in London (Heathrow and Gatwick) has only a single runway with a distance of 1.5 km. As the airport is situated near the busy hub of the city, there are strict regulations for airlines. That is only multi engines, fixed wings aircraft having to do a 5.5 degree approach to the airport, this means the pilots needs to undergo special training to obtain the certification to fly to this airport. The largest aircraft to operate this airport is the A318 which has the steep approach special feature (a requirement for the aircraft to operate at this airport). Most airlines that fly that need this system for their aircraft. The ERJ-190 is the most popular sight at the LCY airport.


An Overview of LCY airport 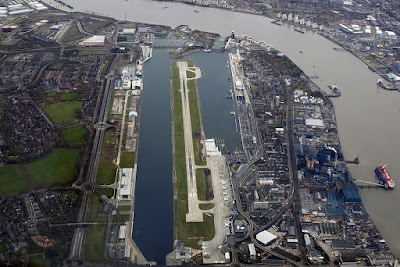 Here is the map of the DLR station. Just 5 mins from the baggage carousel to the train station, that's how convenient it is. 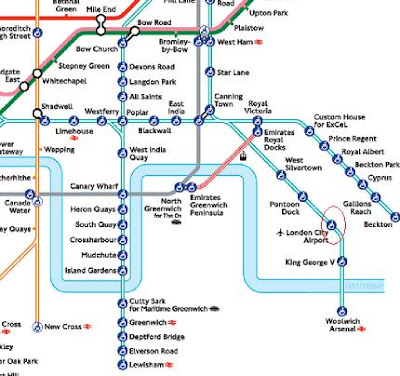 For the rest of the map of the tube underground, click here.

Travelling from this airport to other parts of London is convenient thanks to the DLR train system which connect you to other lines at the popular stations. There are bus services too at the airport and of course the taxis which can be quite costly depends on the distance travelled.

A few other Singaporean were also on connecting flights. There was a sign for London bound passengers to go directly to the gate area, and I saw a few of them and they were bound for London Heathrow, which would be taking off about an hour after my flight. Looking at my watch, I had time to spare and the walk was less than 5 mins.

Lots of passengers were waiting at the gate of my connecting flight,  but something was missing! The aircraft. Apparently it arrived late from a domestic flight. I saw the passengers alighting the aircraft via staircase and later on the aero-bridge was connected to my assigned aircraft.

SP-LMA is my ride to LCY 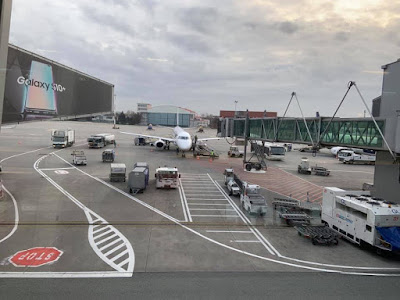 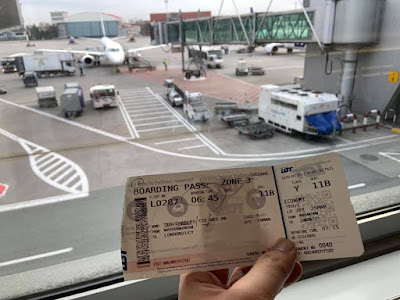 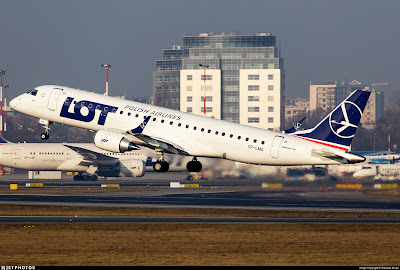 (Sorry for the lack of photos as I was pretty exhausted at this point of time, not to mention an annoying headache following me from my previous flight.)

More photos of Warsaw's airport in part 4 of my trip report.

This photo below is the gate of my flight. Free Wifi is available but you need to keep logging in every 30 minutes. The connection was average. 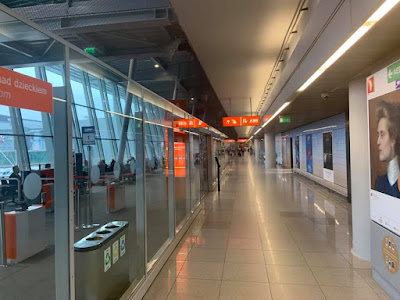 Mind your head when you enter this beautiful aircraft 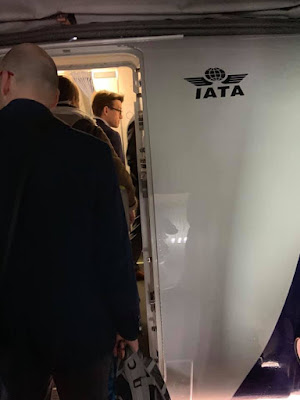 This is the bulkhead row, plenty of legroom space 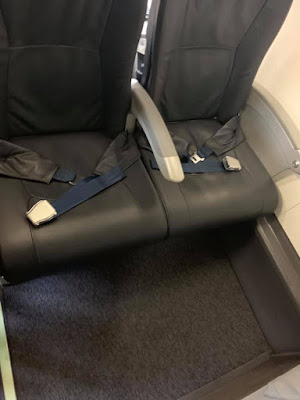 View from my seat (below)

The overhead compartment is small and a lot of us were carrying bulky carry-ons so finding an empty space was a challenge. That is why I prefer to board the aircraft early. 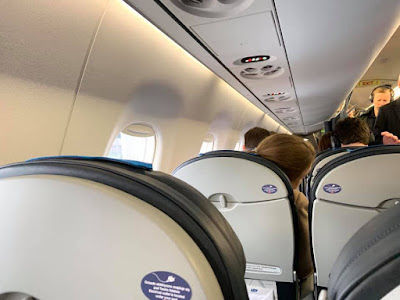 Very tight legroom space! My leg was screaming for space throughout the 2 hours flight. How did I manage to last for this duration, I am still wondering. 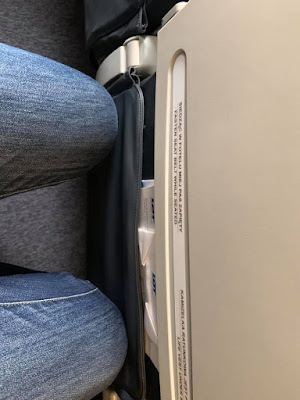 Standard leather seat. The headrest cover should have the airline's logo on it. 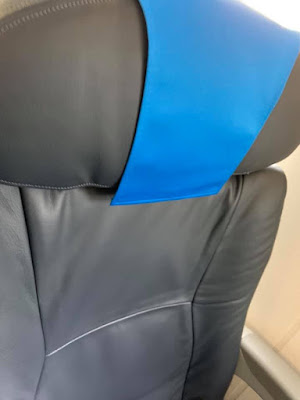 Full flight is not fun especially with the lack of space 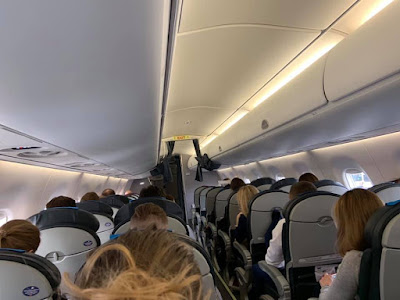 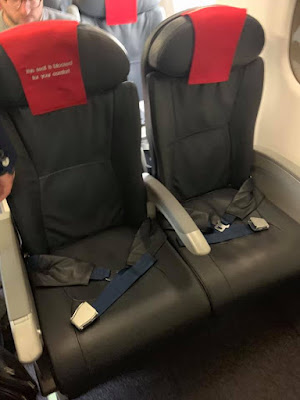 Safety card of this aircraft 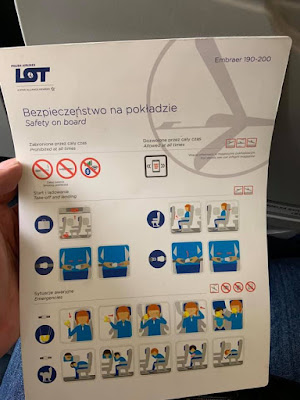 One and only window shot photo, taken before my seat mate appeared 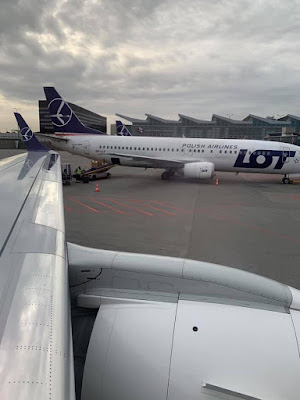 During the flight, a complimentary coffee, tea and water plus a bar of chocolate were offered. Other snacks and drinks were also offered but at a price. I was more sleepy than hungry at that time. Got myself a cup of tea to eat with the chocolate. Chocolate does help to insert some energy into me.

This flight consisted of 3 cabin crew. One at the front and two at the rear. I am impressed with the youngest crew. Always attentive and friendly despite having to cope with a full load of passengers. The other 2 crew were more senior than him and probably assisting him in anyway, good set of crew.

For most part of the flight, I was sleeping. Since I had no window view, that was the only thing I could do. The flight went past very quickly, and I noticed that our approach to London City Airport, we descended steeply. I found out later it was a standard procedure. Approach and landing was smooth. Unlike my previous flight, there was a little bit of bumps at the initial stage of this flight and was smooth all the way to the end.

Parked at a remote gate gave me a chance to take this photo. Unfortunately I couldn't take any more photos as the crowded bus was on the move shortly after this photo below was taken. 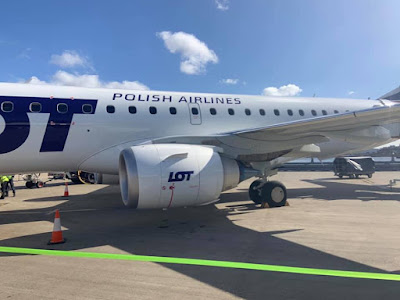 The actual time it took was 2 hours 21 minutes.

After arrival, we spent around 20 minutes waiting for an available gate. This is done with communication between the pilot and the Airport Traffic Controller. At the time of arrival, all gates were occupied. Guess we missed our slot due to the late arrival. We taxied into the tarmac, waiting for a while before moving towards the runway. It was a small airport with a single runway so we had to make room for other aircraft. On the runway (We didn't take off, of course!), we taxied to the last exit and turned into the tarmac again. 2nd time, there was still no slot, so we had to taxi around the airport and fortunately for us for the 3rd time, we had a slot, located at the end of the terminal, near the runway, ready for us.

The passengers on board were probably used to the delay, not a word of complaint, at least from the passengers around me. Mostly were looking at their phones and occasionally looking out of the windows to find out what's going on. The flight crew could have gave us an update or two but I don't think they were pleased with the situation.

I was feeling frustrated at this point, not because of the delay, because of the good weather outside. I missed a great chance to take lots of photos. Well, there is always next time.

I flew on BA Cityflyer and Virgin Australia's ERJ-190 and both of the aircraft have better legroom on their seat configuration than this airline. Legroom space has to be either 29 or 30 inches, my knee cap was annoyed with me at the end of the flight! For Caucasian male travelers, surely more legroom space is needed. Guess you have to pay for it. The seat width was ok, slightly better than the 787's. Would I fly on the airline's ERJ-190 again? Yes, but only on short flights. 2 hours is the maximum, that's for sure.

After hearing reports of missing luggage, missed connecting flights and other issues with this airline, I was relieved that my trip went well. At the baggage carousel in London City Airport, I was grinning to myself when I saw my luggage. It so happened there was a security officer nearby and he must have caught my grin. He approached and asked me a few questions, and that I can understand due to recent events. The officer asked me briefly a few questions, and I answered him and also explained to him why I was grinning. He laughed about it and let me go. Always enjoy coming to London City Airport. Small it may be but its a top class airport for convenience and experience. Oh yes, I forgot to mention that the passport immigration check only took 5 minutes, that was my fastest record for any travel so far. The queue for UK immigration was a lot longer than the non-EU.

Thanks for reading my trip report!