Welcome To My Trip report on Singapore Airlines' Boeing 777-200!

I like to dedicate this trip report to a late friend, J. If I didn't go on this trip, I wouldn't have known you.

I decided to do this trip report which took place in 2001. I managed to find some photos so here we go, some details of the trip report and at the same time, I like to send a tribute to this workhorse who has done wonders for the airline! This aircraft, Boeing 777-200 was purchased by the airline to replace the Airbus A310 on regional routes. Back then, flying this wide-body even on short routes such as SIN-KUL was probably over-capacity. The Airbus A330-300 was probably a better fit for the airline, but this airline got themselves a good deal as Boeing took in the Airbus A340-300 as part of the deal for the Boeing 777 order (Excludes the Boeing 777-300ER).

The reason for this trip was to fly on the airline's Boeing 777-200ER. It took me a while before finally flying on this aircraft and I decided on Saigon as, at that time, it was one of my targets for my flying adventure. I remember paying S$500 plus for this short trip to SGN. Both flights operated by 9V-SRH, the only Boeing 777-200 in the fleet I flew on till today.

For my Flying Adventure trips, I didn't fly much until 2011 onwards. Thanks to the influence of some aviation trip bloggers, it got me into flying on different airlines and hence, I started blogging. Language is not my strongest skill but I will try to improve the content whenever I can and continue blogging to bring you some highlights of my flight experience.

One thing for sure is I will not be doing video blogging because of privacy issues. I have seen fantastic videos on trip reports (Youtube has plenty) but that is not my cup of tea.

What are the differences?

SQ* and SR* series are used for regional haul routes while SV* is mainly used for long haul flights, though it operates on regional routes during the long layover before its next international flight. SV series Boeing 777-200ER uses the Roll Royce Trent 892 engines while the other 2 used the de-rated engines, Roll Royce Trent 884.

The reason for the de-rated engines is to reduce the MTOW which results in lower airport landing fees. MTOW stands for Maximum Take Off Weight. Basically, that means lower MTOW, cheaper airport landing fees. Usually, for long haul flights, higher MTOW gives the airline some benefits such as better flight performance. That's important especially for 12 hours and longer flights. The airline will try its best to send the right aircraft for the route so that the savings could pass on to the passengers. That is why you rarely see A380 or Boeing 747 on short flights unless under special circumstances. It doesn't justify paying the airport fees operating a big aircraft and not able to fill the seats up. That would result in losses which airlines are trying to avoid.

What are the expenses the airline has to deal with on long haul routes?

Airport fees include the use of the airport terminal, landing fees, and parking fees. Accommodation provided for the crew, meal and other allowance for the set of crew. If the aircraft has technical issues, depending on the duration of the delay, there will be additional expenses including repair and if the aircraft is unrepairable for that period of time, passengers and crew may be put in a nearby hotel and those logistics would be a nightmare for the bean counters at the airline's office.

For flights up to 5 hours, the flight and cabin crew usually work on both outbound and the return flight.

For airlines on stable routes (profitable), the airline matches it with the right configuration such as with First, Business and Premium Economy classes. Business Class is practically standard in every route of a premium airline. While for First (Not all airlines have it) and Premium Economy classes are featured in selected routes and that would depend on the demand. This is where the airline's marketing team play their role. If you are lucky, you may get yourself upgraded to a higher class. Usually, this happens if the flight is full and the higher class have seats. How do they choose this? All depends on the ground staff, but as far as I know, they will target the passengers with status first otherwise it will be randomization among the list of passengers. For passengers getting downgraded, there are few reasons for it such as aircraft change, the airline usually will compensate you all depends on the situation.

Here are the 3 different configured Boeing 777-200 series of Singapore Airlines. Physically, the aircraft looks identical, only the configuration of the interior is different.

This is 9V-SRN (2 photos below are mine) 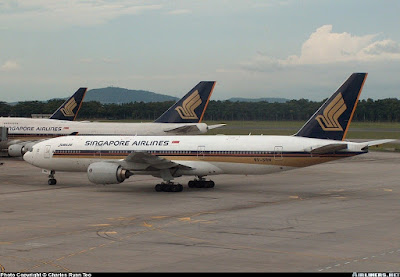 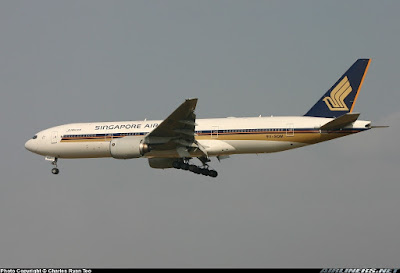 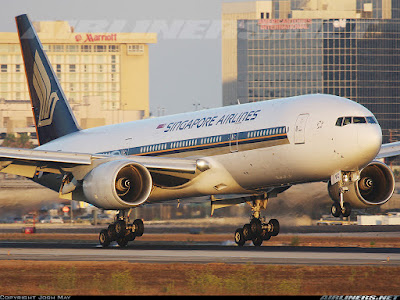 In 2019, the airline is operating lesser Boeing 777-200ER than before as more Airbus A350 and Boeing 787-10 aircraft joining the fleet. Due to the delivery delay and issues with the Roll Royce engines, some of the aircraft's retirement date was pushed back.

The surviving aircraft (April 2019) are:

This is 9V-SRH in it's Singapore Airlines' days 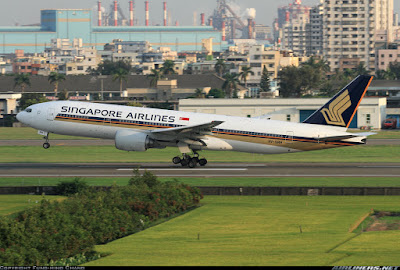 This aircraft joined NokScoot as HS-HBC in early 2015 and has been with this airline ever since. 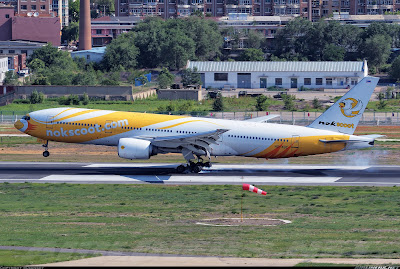 History of this aircraft 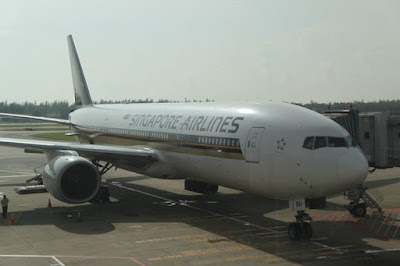 I flew this flight on my birthday in November as I decided to spend it overseas. I was serving National Service at that time so budget was limited.

This cabin you see below is the previous cabin interior style. Using the first generation In-flight entertainment system, it would have been outdated if it is in use today.

Both flights SIN-SGN and SGN-SIN were on the same aircraft. Flight service was great and I remember having a good conversation with one of the cabin crew on board the flight. I did watch one or two movies on board, other than that the flights were quick and so was the trip.

Christmas spirit was felt on this Boeing 777. 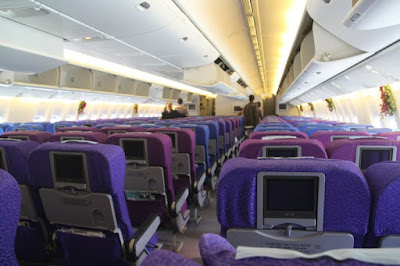 Was this worth $500 for the return trip? Probably not, but at least I got to experience this aircraft type and also had a blast at Saigon. I made some friends over there and we went around enjoying the nightlife with the locals.

Airfare back then was expensive and that was without the existence of Low-Cost Carriers. Options were limited and one had to observe the airfare and when a good deal, comes along, you take it! Now, you don't have to pay this kind of $$ for a return flight there. You have Jetstar Pacific, Scoot, Vietnam Airlines and of course, Singapore Airlines flying you there. With competition, airlines are forced to charge lower. From time to time, premium airlines like Vietnam Airlines and Singapore Airlines offer good deals on this route.

My first experience at Saigon Airport, I chose a private taxi and overpaid by 2 times. It was a lesson learned. Use either Grab or public taxi the next time you are there. 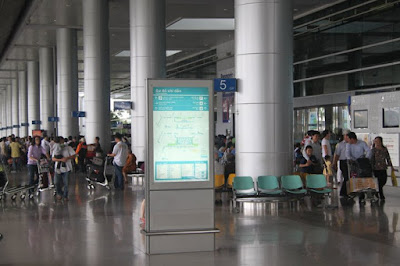 The hotel I stayed in was reasonably priced - cannot remember the name of it. 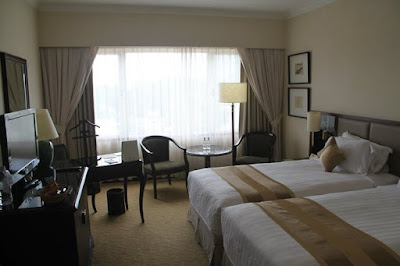 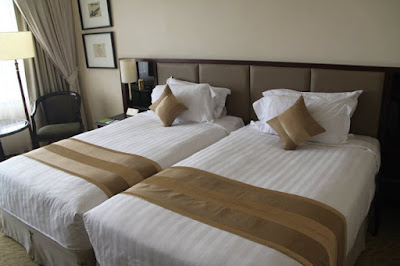 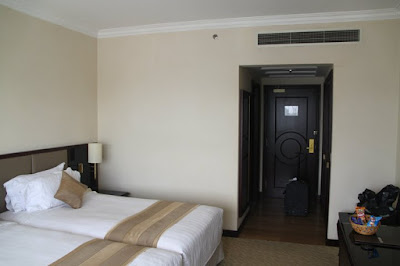 A busy street in Ho Chi Minh City. Reminds me very much of Jakarta.

This was my first trip to Saigon, somehow I didn't expect to return there many times a few years later. However, my job over there is done, so these photos and flights to Saigon are now a memory. However, I have plans to fly with Bamboo Airlines in the near future, so returning to Saigon soon is a possibility. 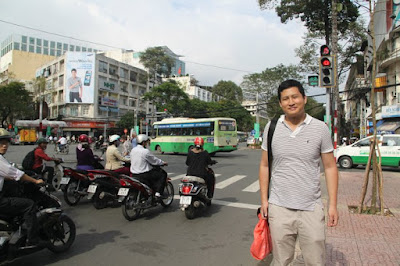 This would probably be my only Boeing 777-200ER ride with Singapore Airlines as now the fleet is dominated by Airbus 350 and Boeing 787-10 aircraft. If you are considering flying on an aircraft especially bound to retire soon, don't hesitate, go for it! I made a poor decision and that was flying a Boeing 777-200ER instead of  Boeing 747SP and till today, this decision is still hunting me.

For my Boeing 777-300 ride with Singapore Airlines, click here.
I have taken lots of photos in Saigon, you can find them in my other SGN trip reports.

This trip is also how I got to know my Vietnamese friend but sadly passed away due to cancer. Wish his family well!

Have a fantastic week!
Charles
Posted by Charles Ryan Teo at 07:47