Welcome to my latest blog post on my Aviation Photography!

Do note: Some of my aviation photos are uploaded on Airliners.net and Jetphotos. All the photos below are photographed by myself. The photos may not be the best quality, but I hope you enjoy viewing them as much as I do.

Introduction
I used to take photos in the past with my group of friends but eventually the interest in aviation photography faded but the strong enthusiasm in aviation continues.

Today, I am no longer a photographer as I don't have the time and not much interest in it. The quality of my photos cannot be compared to the Airliners.net and Jetphotos.net photographers. Theirs are way better and I very much prefer admiring their photos and instead concentrating on publishing blog posts like this.

Here are some of my memorable photos, with stories of each one of them. Hope you enjoy it! 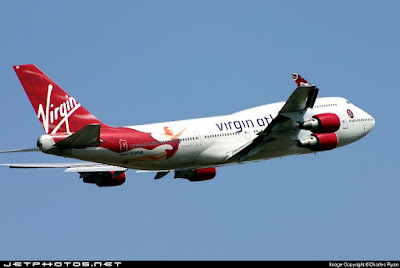 This photo (Above) was taken in London. I stopped at the Hatton Cross station and walked about 10 minutes away from the station to the popular spot for plane spotting and photography. Traffic at London Heathrow is fantastic, lots of traffic that I don't get to see at my home base, Singapore. At that time, Flightradar24 didn't exist and some of these photos, I captured at the perfect timing.
This Virgin Atlantic Boeing 747-400 with the special lady flying with the flag was one of the highlights.
2. Qantas Boeing 747-400 Wunala Dreaming VH-OJB (SIN) 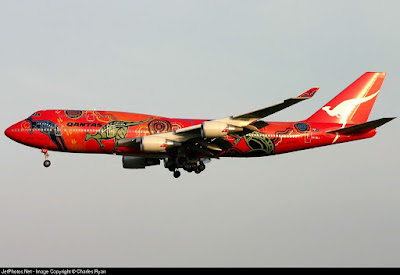 I photographed this beautiful Wunala Dreaming of Qantas in Singapore, one of the spots to capture the runway 02 Left action. I remember going to this spot with a couple of spotters and at that day, it was pretty boring with the same old common aircraft. However, when we saw a red nose from far, that got us excited especially when we saw the 4 engines. This beauty just arrived from London which would stay for a short while before flying off to Sydney. 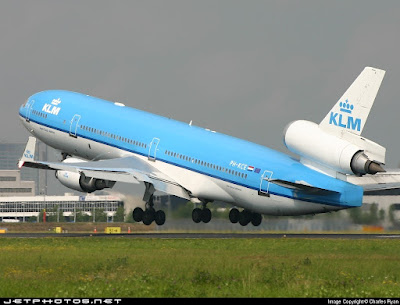 Thanks to my friend, B. He drove me around the popular spots at AMS for plane spotting sessions. Even though most of my photos were crap, I managed to capture a few decent ones (I won't dare to say they are good). This is one of my favourite photos, I love it for the angle of this beautiful tri-jet and the dark background making the subject more attractive. Today, the MD-11 pax aircraft are no longer in service, so like they say photos are the best way to save memories of them.
4. Pulkovo Aviation Enterprise TU-154M RA-85836 (AMS) 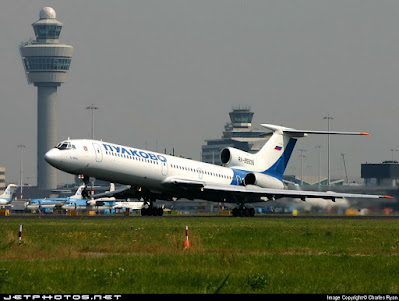 Back then in early 2000, there were more interesting subjects to capture than today and this is one of more interesting ones. The TU-154, a russian built aircraft of Tupolev was seen speeding down the runway and at this point, rotate in front of us, with the 3 Aviadvigatel engines screaming, that was definitely music to our ears. If I was more brave back then, I would have booked myself with this airline to do a return trip. Sadly, I haven't flown on a russian built plane yet.
5. U.S Airways Boeing 767-200ER N652US (AMS) 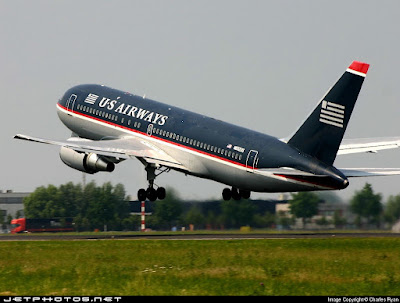 Among all the U.S airlines liveries, this has to be one of my favourites. I have always been a fan of this airline and even though I spotted the updated livery, this one goes to my book of favourite liveries. Both the aircraft type and airline has gone into history unfortunately. American Airlines has bought over this airlines and now operating under this company.
6. KLM DC-2 NC39165 (LEY) 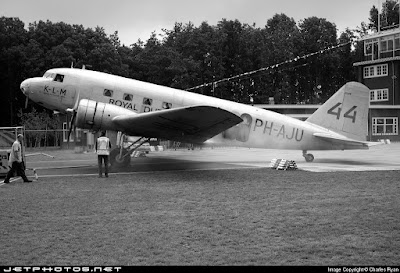 This airline was privately owned, built in 1935 and was spotted at LEY(Leysted) to do demonstration flights. At that time, this was the only DC-2 in operation. I was very lucky to witness the engine start up, take off and landing of this beautiful classic. Sadly, the plane has disappeared from the aviation world. One of my most precious photos in my collection.
7. Northwest DC-10-30 N237NW (AMS) 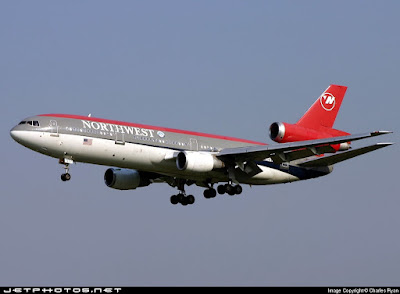 The DC-10 is a plane that I regret not flying on, I did had a chance when it flew to Singapore with this model. However, at that time, this aircraft had a number of accidents which made me not want to fly on this airliner. How silly I was, at least on the bright side, I manage to catch a few decent photos of this beauty. This DC-10 was on approach to AMS to airport from Detriot (DTW).
8. Japan Airlines DC-10-40 JA8543 (NRT) 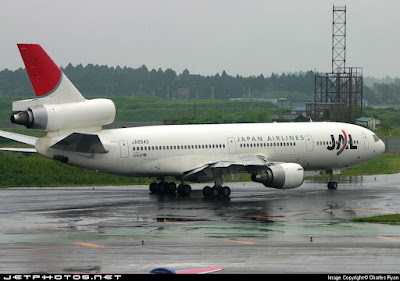 This was one of the 2 airlines that operated the DC-10-40 series. The other airline was Northwest. This aircraft type was originally designed as the DC-10-10, but with extra fuel tanks. Modification was also done to extend the wingtip and add on a rear landing gear to it. Not just that, it used the more powerful Pratt and Whitney JT9D-15 engines which means it performed better than the -10 series and Northwest requested to Douglas to change the name to -40 series. I miss the livery of this aircraft, very much prefer this to the current livery.
9. DHL Cargo Boeing 727-200F (SIN) 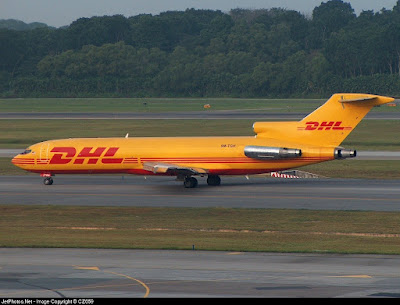 For some reasons, I love the Boeing 727 a lot. The design of the plane wins me over the 737 series. Fortunately, I was lucky to flew on this aircraft type but the flights took place long time ago, back then I had little interest in aviation. I would gladly fly on one today if a chance comes around. At that time, Singapore Changi Airport Terminal 1 had a viewing gallery which face the runway 02L, I remember making a dash there just to photograph this beauty.
10. Martinair MD-11CF (AMS) 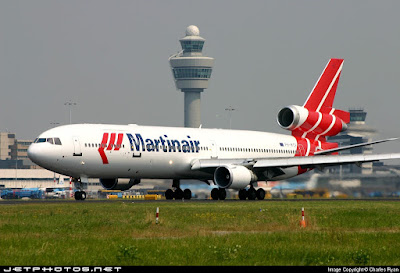 One of my favourite liveries at that time, this is the converted freighter of Martinair which has since been retired. This company is under the Air France- KLM group is now only operating the Boeing 747-400BCF. AMS is one of the airports in Europe that I manage to spot many interesting cargo airlines and this is one of them.
11. Air Via TU-154M (DUS) 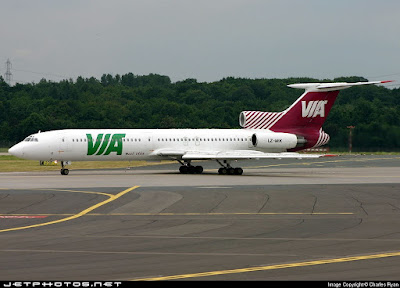 This defunct bulgarian airlines was spotted at DUS airport getting ready for take-off. It was my first time coming across this airline and how lucky I was to witness the take off of this beautiful Russian jetliner. Together with my plane spotting buddies, we caught many interesting airliners at this German airport.
12. Qantas Nalanji Dreaming Boeing 747-300 (SIN) 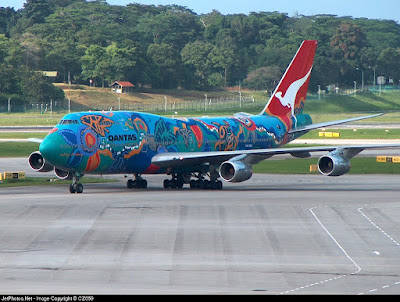 The golden days of plane spotting at SIN, taken at the old viewing mall which offers better view than today's. Traffic in the early 2000s is far more interesting than today and Qantas operating all types of Boeing 747 series except the -100 to Singapore at that time. This 747-300 operated on QF77 flight from PER to SIN. My only regret was not flying the airline's 747 Classics before they were retired.
13. Australian Airlines Boeing 767-300ER (SIN) 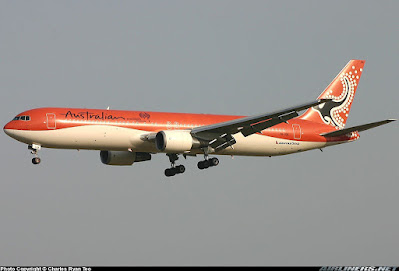 Qantas set up this full-service airlines in 2002 and lasted for 4 years. It was based in Cairns and operated independently during this period. This aircraft along with another 4 were operated during this short time and operated on routes to Japan, Hong Kong, Singapore, Indonesia from it's homeland. As a fan of orange colour, this has to be one of my favourite liveries till today. The management of Qantas has decided to shut down this airline in 2006 and in 2007, the fleet returned to mainland Qantas. Jetstar later on would play a role on expanding Qantas group.
14. Aeroflot Airbus A330-300 (LHR) 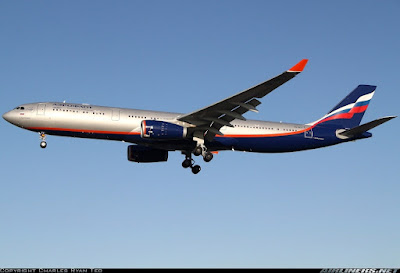 This aircraft back then got me very excited as at that time I was a massive fan of the A330 and the livery of this airline is fabulous. I remember rushing over to the famous spot to catch this beauty and the weather on that day was perfect. This airline flies a variety of aircraft to LHR as it operates several flights there a day. Spotting at the famous Myrtle Avenue spot has to be one of my top highlights in my planespotting past time.
15. Frontier Airlines Airbus A320CEO (DEN) 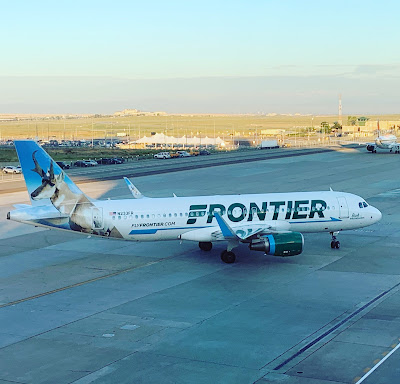 I have always been a big fan of Frontier Airlines and get to visit one of the hubs is a highlight to me. Not the best photo, but this brings fond memories of my 2019 trip to U.S including a couple of flights with this airline. Nothing spectacular with the inside of the plane, but for the exterior, it has to be one of the most eye-catching liveries, thanks to the different animal tail livery on its strong fleet of over 100 Airbus A320/A321 fleet.
16. ANA Boeing 787-8 (TSA) 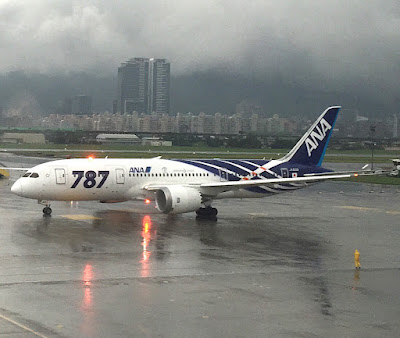 For a period of time, I spend my holidays in Taipei and often visit Taipei Songshan Airport (TSA) for plane spotting. I was happy to spot this beautiful bird in 2015 and later on, I managed to fly on my first 787 with this same airline from this airport to Tokyo Haneda. Lots of fond memories of the 787, ANA and the airport.
17. Far Eastern Air Transport MD-82 (TSA) 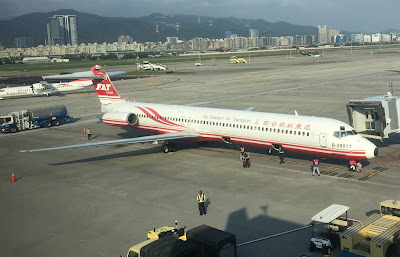 At this airport, I also did a lot of domestic joyrides on this beautiful MD-82. This airline was the only one that operated this T-tail jet and sadly now the airline is no long around. Spotting at TSA today is not as interesting as before especially without the presence of the Mad-dogs (Nickname of this aircraft).
18. ANA Star Wars livery Boeing 777-300ER (LAX) 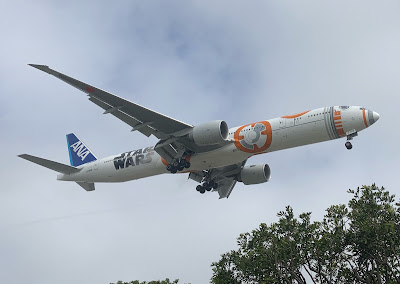 Every airport has a great spot for plane spotting and at LAX, that would be at a spot along South Sepulveda Boulevard, near to In-N-Out Burger outlet. That was the first spot I went to after my arrival at LAX. Among all the great traffic coming in on that day, this was my highlight. I was very excited when I saw on the flightradar24 this plane coming in, the weather was perfect for plane spotting too. This photo was taken in 2019.
19.  American Airlines (AirCal retro livery) Boeing 737-800 (DFW) 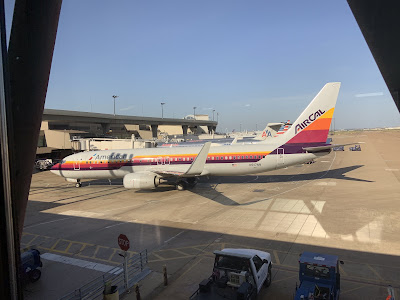 I spent a few days at DFW airport, walking around and did plane spotting at the airport. I felt like a kid running around, feeling excited as many aircraft at the airport was my first sight of them especially this retro livery plane. Among the retro livery planes I spotted, this has to be my favourite. If you look closer in this photo, you can spot the airline's MD-83 aircraft which has been retired, I was lucky to see them.
20. United Airlines Boeing 757-300 (SFO) 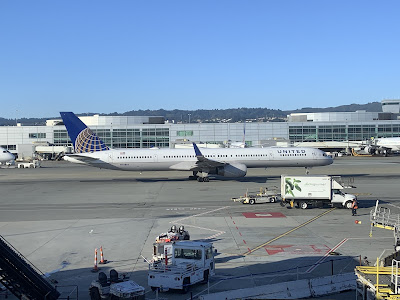 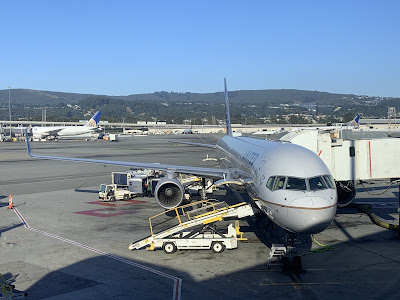 My one and only ride of the Boeing 757-300 goes to this airline, United Airlines registered N57870 and even though I flew in on this aircraft from LAX on a very short flight, I enjoyed every minute on board this flying pencil. Thinking back, If I was more brave then, I should have asked for a cockpit visit end of the flight and have a little chat with the pilots about the plane. I am unsure whether will I get another chance to fly the 757-300 especially with the current situation. I have booked myself on a Delta 757-300 scheduled flight later this year, but whether I can fly to the U.S all depends on the omicron situation.
For now, please do stay safe and with the omicron virus spreading, do take extra precaution. My trip in May is still pending. The worst case scenario is for me to fly to London and cancel or postpone my U.S flights. All would be decided by end of April.
Have a Happy 2022 New Year !!

My favourite airline: EVA Air!
Have a good one!
Charles
Posted by Charles Ryan Teo at 12:56