Welcome to my trip report on British Airways Cityflyer!

* Airliners.net and Jetphoto photos are credited to the respective photographers.

This is my photo of G-LYCL, photographed opposite London City Airport. 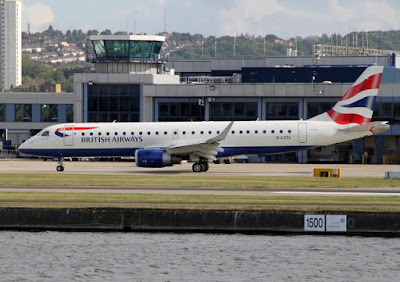 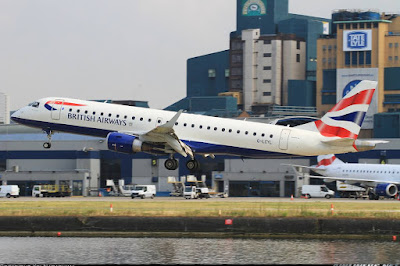 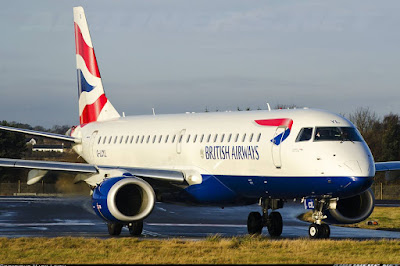 I had to leave Europe earlier than I liked, as I needed to go back to work. I had some joyrides with my friend, Raymond and he would continue venturing Europe by himself. As for me, I had to return to London to catch my Etihad flight back to Singapore via Abu Dhabi. Looking at the choices I had, I narrowed them down between two airlines: Air Europa and British Cityflyer. Both would be new airlines for me and the exciting part about flying with either airline was they were operating the ERJ190 which I had not flown yet. Air Europa's airfare was more expensive by $100 and it was flying to London Gatwick which is far away from where my sister lives, whilst British Cityflyer's flight time to London departed quite early but arrived at London City Airport which was closer to her place. I went for the latter as I would have more time to pack up at her place, do some last-minute shopping before heading to Heathrow for the long ride home.

Cityflyer uses its parent's (British Airways) website for booking. It is user-friendly and I had no problem booking my flight and selecting my desired seat. It took me within 5 minutes to get everything done, that's what I like.

I had to wake up at 0530 as my flight was departing at 0740, this is what you called a red-eye flight which most of us dread. At that point, I wish I could sleep longer.

I bid farewell to Raymond who returned to sleep after I left. I took the arranged hotel shuttle to the airport. The ride took about 10 minutes and when I was there, everything was quiet. 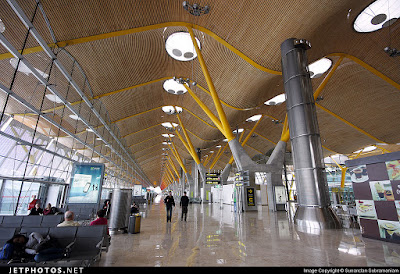 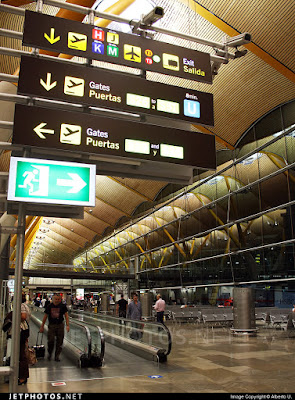 The self-check-in kiosks for this airline, but as a collector of boarding passes, I went over to the check-in counter instead. 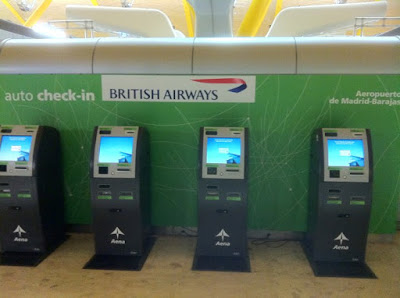 The excitement came - boarding the ERJ-190 for the first time! 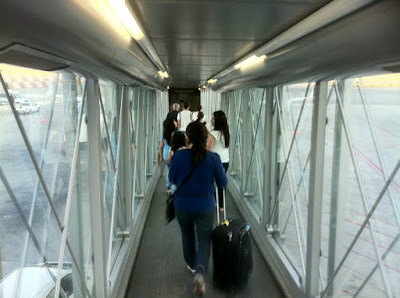 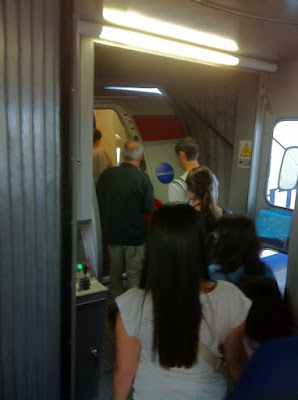 Tiredness was how I felt at that point. Waiting near the boarding gate with my eye half shut, my body was screaming for the bed. I had no choice but to bear with it. Once the announcement was made to board, I dragged myself to the aircraft and I was welcomed by a couple of cheerful-looking crew which certainly helped to improve my mood.

I got to my seat and started surveying the cabin interior. I was impressed with the spaciousness, the window size and the leather seat. It was comfortable and I could fall asleep within minutes. Somehow, my excitement picked up and I felt more awake then. I had taken lots of photos, unfortunately like I mentioned before they are gone. What a pity!

Anyway, our plane pushed back on time and we made a powerful take-off towards London Gatwick. The flight was smooth and I did get up to explore the cabin. Looking at the rear, every seat was taken. The ERJ190 is certainly a great aircraft to fly on and I would fly on this plane again in a heartbeat.

The service on board was great. Cabin crew were smiling and ensuring all of us were comfortable. Seeing that they were nice, I asked one of them whether I could get a cockpit visit after the flight. She told me she would get back to me later and true enough she did that and came back to me with a nice smile. My sleepiness by then was gone!

My visit to the cockpit after the flight was a brief one, but my chat with the pilots was interesting as they shared with me their experience and like for this aircraft. After this flight, they were continuing their journey to Venice. I wish I could stay longer, but I had to go, to make way for the passengers who were waiting to board this aircraft.


Cabin interior of the ERJ190 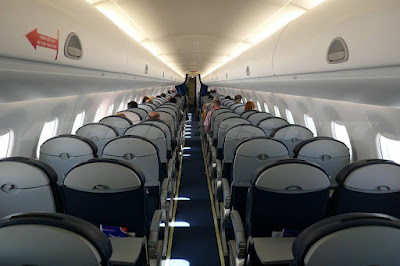 The legroom space - definitely good enough for me. 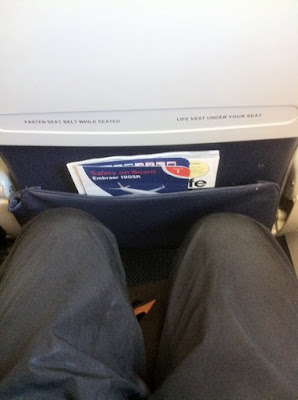 The 2-2 seater on the ERJ-190 is the most comfortable in this class. Prefer to fly on this than the more common Airbus A320 and Boeing 737. 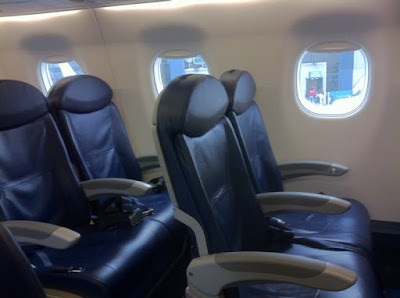 I was sitting very near the front of the aircraft. Row 5D if I am not wrong. 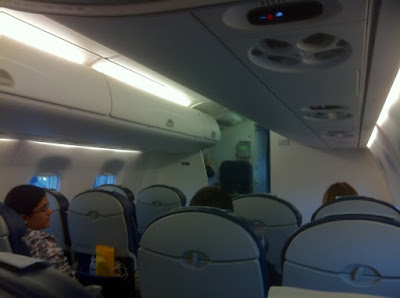 No IFE system on this aircraft but doesn't matter anyway, sleep was more important at this point. 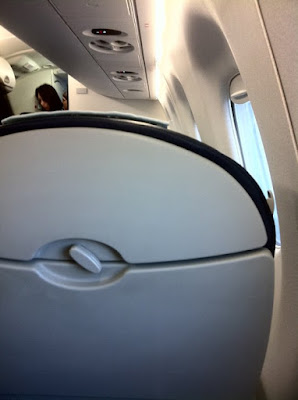 Cabin shot of the airline's ERJ-190 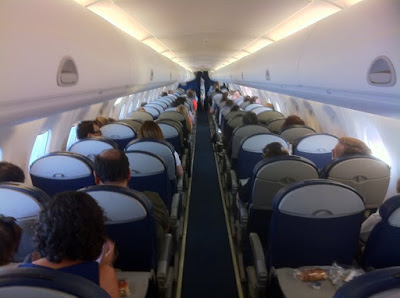 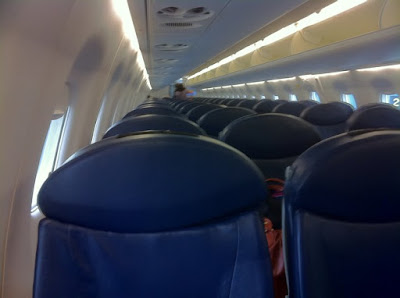 What was served on this flight?

I was pretty full after that. 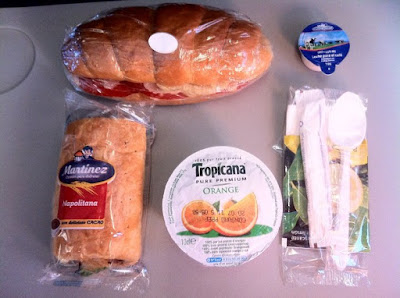 Just before push back in this lovely weather at Madrid. 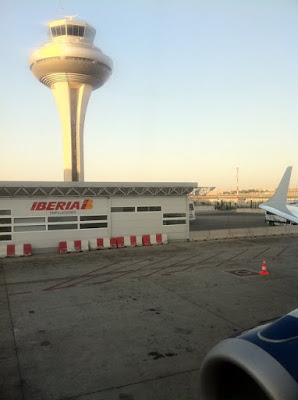 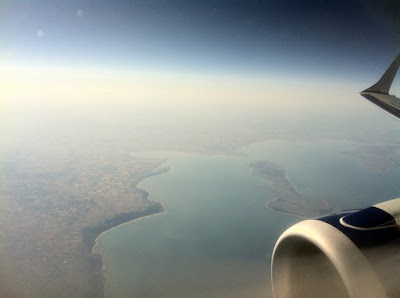 Touched down at London City Airport, passing by this office facing the airport. I did my spotting over there. 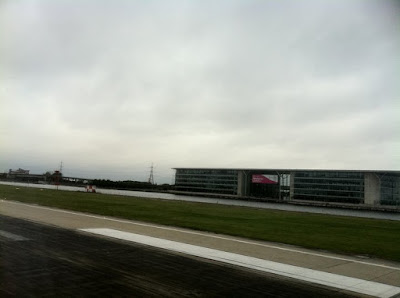 The aircraft made a less than 180 degrees turn before engines were shut off. We were to alight from the aircraft via the staircase and walk to the terminal building. 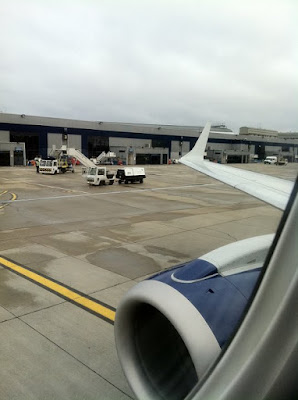 A huge thank you to the excellent in-flight and cabin crew for allowing me a visit to the cockpit. The crew were preparing its next flight to Venice. 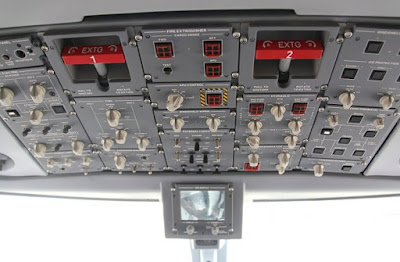 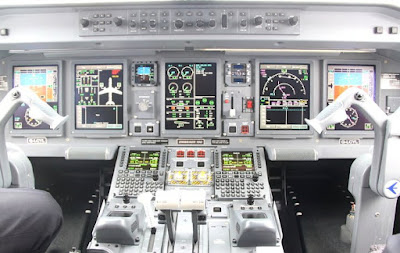 I had a smashing time onboard this flight. Despite the early hours, the crew were in a cheerful mood and friendly towards us. The ERJ190 has definitely impressed me and I wish I can fly more of this aircraft type in the near future. It is different from flying with the common A320 and B737 and I am impressed by how passenger-friendly this aircraft is. Looking forward to fly more of the ERJ190s and for BA Cityflyer? Even my mum likes it. Well done!