Welcome to my trip report on Air Asia vs Jetstar Asia! 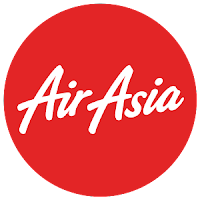 *Aircraft photos are credited to the respective photographers.

Air Asia A320 in one of the many special schemes 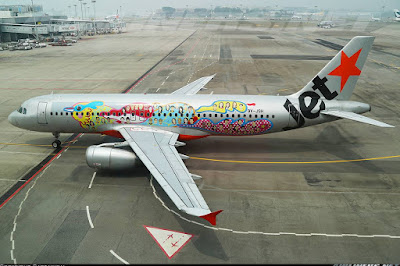 I was browsing through the websites and when I saw Air Asia was having a sale, S$40 all in, I couldn't resist and took advantage of it. Since I was not planning to bring luggage, it was definitely worth it! My Jetstar Asia ticket was booked a couple of months ago, decided to pay $100 to change the dates and extended my return to the 28th. My outbound flight was on the 3rd March and originally supposed to fly back on the 15th. I decided to make my trip more excited by adding 2 flights, Malaysia Airlines MH605 KUL-SIN (17th March) and the Air Asia SIN-KUL sector (26th March) to make it a record for the most flights flown for the month. To make it even better for me, my Australia friend would also be in KL on the same date, which meant that I won't be alone over there!

A few days before my flight, I received an email regarding a change to my flight timing. From 1430 hrs, it was changed to 1230 hrs on the same day. It was great for me, as I could spend more time over there. I made my way to the airport at 1000 hrs, got hold on the Wonderful Citaro bus on the 53, which is much much better than Scania buses which in my opinion 'scare' commuters away. (Scania = Horrible brand for buses). Anyway, once I reached the airport, made my way to the check-in counter. I was hoping for a proper boarding pass from Air Asia, but I only got the receipt which I think its what they have. Anyway, the counter lady was unfriendly, but at least I got my receipt and off I went to explore around the terminals. That time I was about 1 hr and a half ahead of boarding time, so walking around in the departure hall was the only thing to do. I grabbed a bit later at the Dunkin Donuts.

Before I know it, the time was already 12 noon, I went to check what registration of the aircraft I was flying on, 9M-AHR. I was disappointed as I wanted to fly one of Air Asia's aircraft with special livery. Nevertheless, I made my way to the gate, took out my Ipad and went through the security screening. Look at the crowd at the gate, it was about 90% full and I was right. 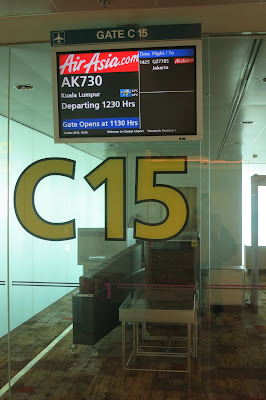 Cabin photos of Air Asia's A320 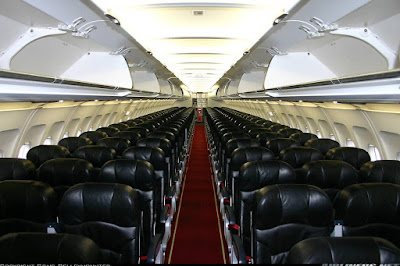 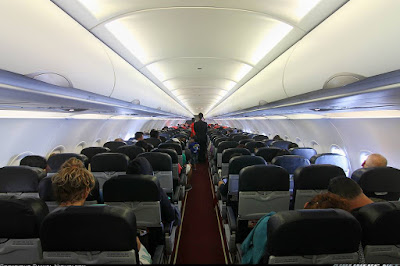 Boarding was a bit late, due to the late arrival of the aircraft. Doesn't matter anyway as it was only about 15 mins after departure time. Not as bad as MH flight, and the crews were much friendlier. Before long, the plane was pushed back and we were on our way to 02C for departure. This Captain was very informative and kept us updated throughout the flight. He was pretty accurate too when he mentioned about turbulence just before the approach to KUL airport.

Another powerful takeoff, the buzzing sound of the CFM engine was obvious, the plane rattles and a few up and down drifts before settling itself at FL210 (21000 feet). I always like the leather seat on Air Asia, its comfortable for my back. As for the legroom space, it is ok for a short-haul. The cabin crews were attentive and most of the guys I observe were checking out the Chinese stewardess who was taking care of the front cabin. I have to admit she's quite hot! ;)

We had a bit of turbulence when going through the clouds, nothing bad of course, just some jolts and cracks from the cabin. Nothing worrying! The landing at KUL airport was however smooth and soon we were on the tarmac. I was quite worried that the crowds at LCCT would be as bad as KUL, but it turned out to be just fine. Just 15 minutes and I was out of the airport. I got myself a bus ticket and soon made my way to my hotel.

As this was a short flight, nothing much to be mentioned, to be honest. Service was what I expect from Air Asia, polite and helpful. I would definitely recommend this airline for short-haul flights.

When I flew on this aircraft, it was without the "Valuair" titles. 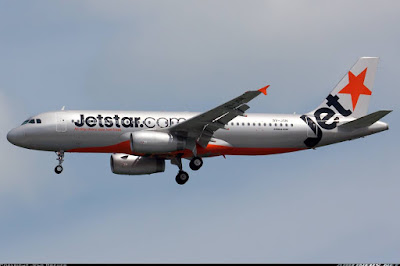 At present (July 2014), this aircraft has the titles and with it, it can operate on Indonesian flights. A requirement for Jetstar to operate it to Indonesia. However, the airline sometimes uses this aircraft plus a few others on other routes. 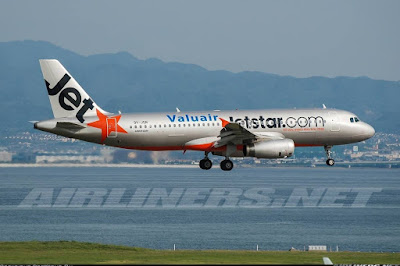 Cabin photo of Jetstar's A320 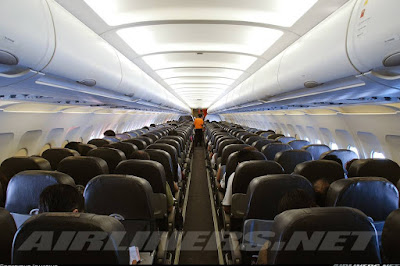 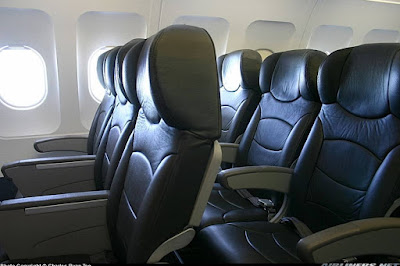 Originally my flight was in the evening, but because I had to work in the evening, I changed the timing to the afternoon flight. I had a tough time doing a web-check in on the internet. I normally do so, so that I can avoid the crowds at the airport. One advantage flying on Jetstar over Air Asia is that you depart from the KLIA airport instead of the LCCT.

Anyway, I bidded farewell to my friend, Julien who would be meeting his girlfriend in KL on the 1st April. I walked to the KL Sentral and took the express train to the airport. I got to say the train is better than Taiwanese' HSR train. Why? This train has free wifi and it reaches to the airport. The journey took about 30-40 minutes. Checking in was a breeze, it took less than 10 minutes. This counter lady wasn't particularly friendly but she gave me a pass without questions and of course, I went to the departure hall. When I looked at the watch, I was about 2 hours ahead of the schedule flight, plenty of time for me! I always prefer to reach the airport early, to avoid any late drama.

Anyway, once I got passed the immigration, I took the monorail to the Satellite building. MH's flights are operated for the main building, while the rest were at the other building. It was a pleasant airport to have a walk, but certainly not the best. There are not many things to see, and the jungle walk was closed for the day due to maintenance I think, so it was pretty boring.
I did some plane spotting but there weren't many activities, so I settled at Coffee bean for a coffee and a cake.

Soon, it was time to go, there was a Silkair flight which was also heading to Singapore departing 10 mins before ours. 9V-SLB was MI's A320. I haven't flown with MI before, perhaps one day. Anyway, my aircraft, 9V-JSN came in late and we waited until the announcement for boarding. We were all in the aircraft within a half hour and it was 90%, some empty seats can be seen at the last few rows.

This set of crews were disappointing, they looked tired and disinterested. No smiles from them or anything, I felt I could do a better job than them if I were to ask to take over one of their duties. I had flown with Jetstar 3 times and this was the worst set, that's for sure. Not knowing for them, there is a flight blogger who is pretty much observing every detail of the flight. Only staff that seem to be in a happier mood was the Captain who gave us details about our flight which was very much appreciated.

Push back was quick and we made our way to runway 32R for departure. The flight itself was not too bad, the only thing that was a huge letdown was the service from the crews. No smiles, chit-chatting among themselves. I don't understand why do you need 2 crews to stick together at certain times on the flight. I think these set of crews especially one of them need to be reminded of their duties. Their uninterested look on their faces tells me they should look for another job.

Soon, we landed in SIN. The landing was a bit rough as the crosswind was quite strong. A bit of up and down drifts as we landed on runway 02L. I kind of enjoyed it though. We taxied to the terminal and parked at Gate D32. Our aircraft (9V-JSN) was heading to Manila next. When I left the aircraft, a couple of crew were chatting each other, ignoring the passengers who were leaving the plane.

The only positive aspect about the flight was the in-flight product and the updates from the Captain.

The winner goes to Air Asia as the crew were better than Jetstar's.