Welcome to my 2nd report on Spanair!

Some photos are credited to the respective photographers from Airliners.net and Jetphotos.net

This is my return journey - the more exciting part of my MAD-BCN-MAD joyride day.

We spent a day in Barcelona and of course, that wasn't enough, we couldn't go to as many places as we wanted. After spending a few hours at Central, we took the bus to the airport. That time at the airport, we were feeling nervous about our flight! On our first flight, we had our aircraft changed from an MD-82 to an A320, you could imagine how disappointed we felt even though we got ourselves an A320 with star alliance livery.

So hopefully the aircraft would not change on this flight and furthermore, the MD-87 was harder to get than the other MD types.

At this time (July 2014), the airline had already gone bankrupt. Due to huge monetary losses and foreign investors notably Qatar was unwilling to bail this airline out, hence the airline went bust a few months after our flights. It was sad for aviation, especially to all the MD fans! At least I lived to tell the tale of this airline.

Flight route of the day 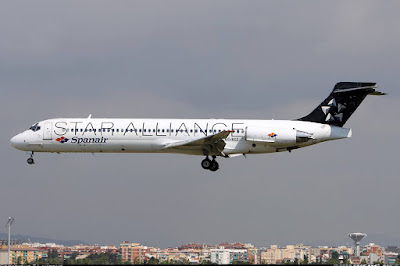 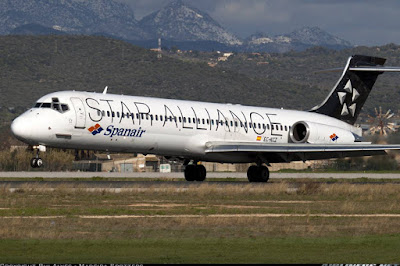 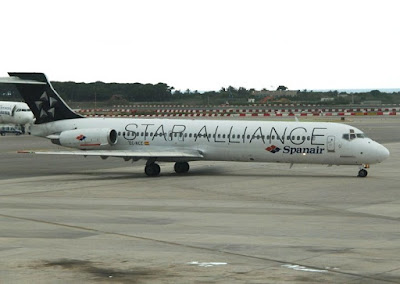 Flying with Spanair was a priority for both of us, mainly because of the aircraft type. At that time of booking, both outbound and inbound flights from Madrid was to be operated by MD-82 and MD-87 respectively. The airfare was quite reasonable, can't remember how much but it was less than S$100 one way.

Fortunately for us, when we checked-in! The seat map showed us the 2-3 seating configuration and we were delighted. Usually, after checking in, you are more or less safe unless there is a last-minute equipment change due to faulty aircraft. That's a risk when flying with an airline operating a mixed fleet. 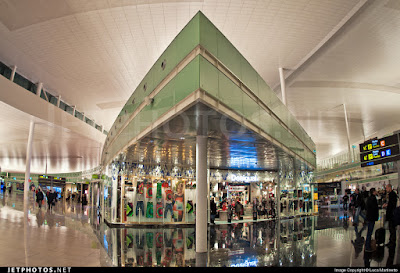 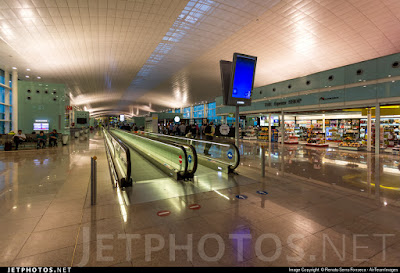 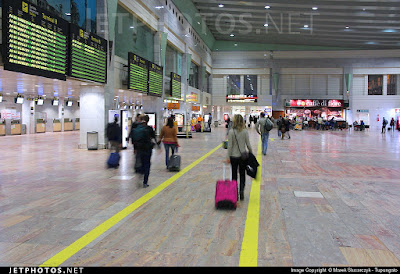 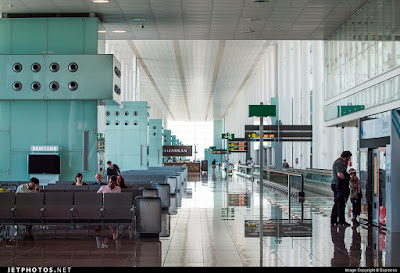 We went out of the airport to check it out. 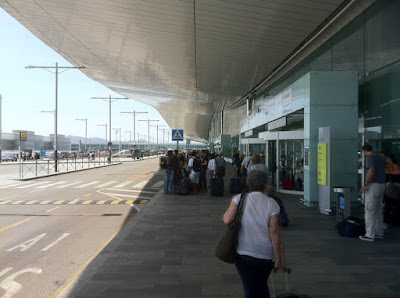 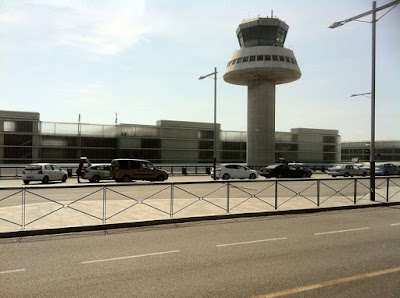 Interior of the airport 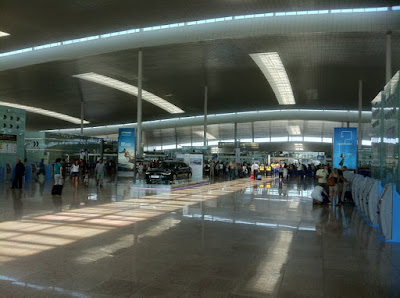 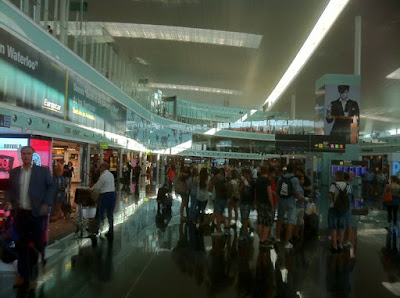 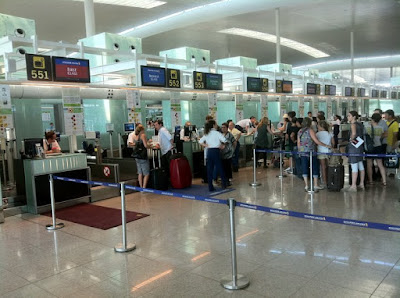 Quite a pleasant airport, it was quite photography-friendly, especially at the air-side. Raymond and I went snapping the local airlines, and it was a paradise for both of us.

We did our check-in 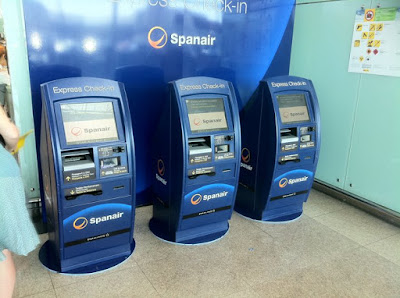 This was our departure gate 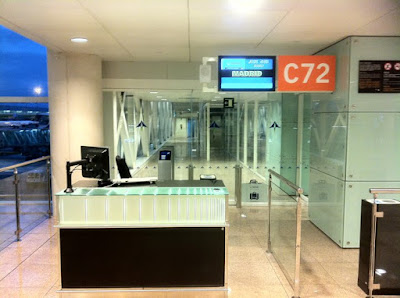 Our flight was delayed

We went to the airport much earlier to do some plane spotting, it was heaven to us. We got lots of nice beautiful birds we don't see in Asia, plane spotting at the departure gates was certainly friendly. We walked around until it was time for our actual schedule departure which later was delayed 2 hrs later. Our plane had arrived about an hour before our scheduled departure. At our gate, I saw a vehicle with a man who looked like an engineer, going into the plane with the Captain, seemed that the plane went tech! However, the announcement was finally made that the flight was late due to late arrival of crews which I didn't believe. Furthermore, there was also a star alliance MD-83 that went 'tech' (meaning broke down), and the passengers were transferred to another aircraft, an A320. Thank goodness, that didn't happen to our flight.

It was a great relief when we heard this announcement, by then both of us were exhausted and couldn't wait to head to bed. I was very sad at the same time as I was heading home the next day. Anyway, we were one of the last group to enter the aircraft as there was a long queue formed before we could do anything! The excitement of flying the MD-87 excited us once again!


I chose the seat beside the engine. It was pretty noisy especially take off, but it quietens down while cruising. A very different experience flying from the A320 and B737s, that's for sure.
Legroom space was definitely better than the A320! We had the seat beside us empty and that gave us extra legroom space on this flight. 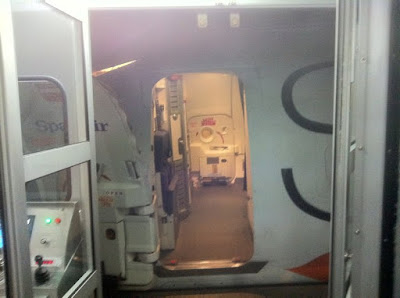 The cabin shots of the MD-87 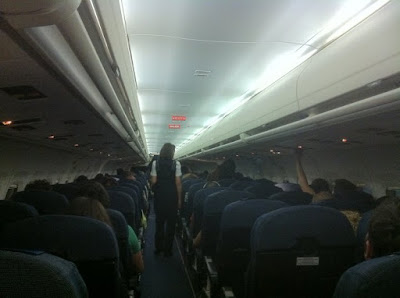 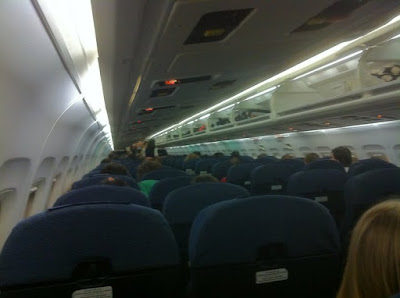 This is my window view, needless to say, it was quite noisy during engine start-up and take off, but I love it! 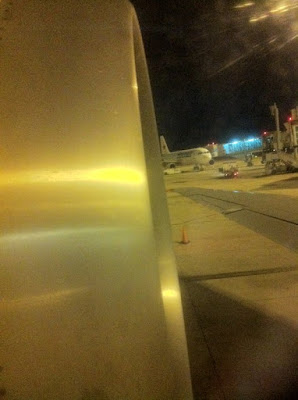 The service on board was non-existence, the cabin crews looked more tired than I do. They did a couple of rounds then disappeared to the back of the plane. When the plane started descending, they didn't bother to check whether the passengers were in proper seating position. For the first time of flying, my seat was in a reclined position when we touched down! The ride was powerful and smooth throughout. We landed late, no apology from the crews and that was disappointing!

We were delighted to have gotten the MD-87 despite the delay. This aircraft is the shortest among the MD-80 series. Even though we reached back late, we had lots of fun! Doing such joy rides is definitely thrilling for aviation enthusiasts and its pretty common for most of us especially those from popular websites such as Airliners.net, Jetphotos.net...etc. So if you have the time to do short hops especially on airlines operating rare types or airlines look like going burst in a few months, fly them quickly before they are gone.


Thank you for reading.